Lightning still searching for their first win in RHF Trophy 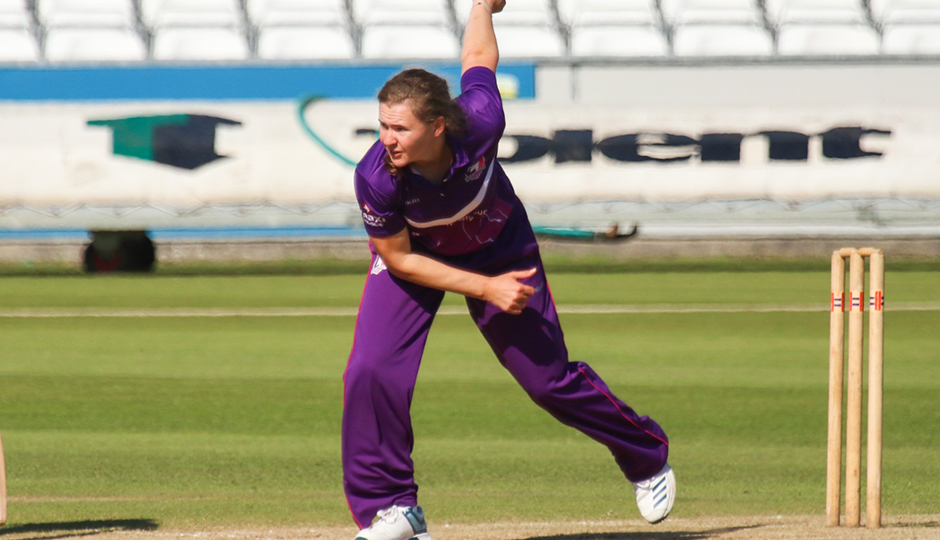 Captain Kathryn Bryce lead from the front with bat and ball, claiming 5 wickets and scoring 71*, however it was not enough to clinch the first Lightning win as their trip up north ends in a 9 run defeat to Northern Diamonds.

It was another sunny start to the day as Lightning got their second game of the Rachael Heyhoe Flint Trophy off to a dream start.

With the Bryce sisters firing on all cylinders it only took 6 overs for Lightning Captain Kathryn to have earn her wicket maiden, dismissing big threats Winfield-Hill, Kalis and Brunt whilst sister Sarah stumping Armitage for a total of 24 runs.

The Lightning bowling attack continued to bombard the Diamonds batsmen who struggled to get the ball past the tight Lightning field.

As play continued Lightning needed to strike as the Diamonds pairing of Sciver and Gunn settled at the crease and started to build a partnership. It wasn’t long however until Bethan Ellis struck twice in quick succession, bowling a superb ball to Gunn who sent it soaring straight into the safe hands of Nancy Harman and clean bowling Heath for 3.

As the 30 over mark was reached, Diamonds batter Nat Sciver got into her stride, reaching her fifty, building a strong partnership with MacDonald, Lightning needed to strike.  It was the introduction of Teresa Graves in the 39th over that re-energised Lightning as she instantly dismissed MacDonald.

Unable to dislodge the infamous Sciver, who racked up her hundred in the 45th over, Lightning made do with removing Smith from the crease as Munro re-joined the attack and was back into her wicket taking form from last game.

It wasn’t until the 47th over that Lightning had a breakthrough with the ball, Kathryn Bryce taking her fifth and potentially most important wicket of the day, bowling Nat Sciver out for 104, Northern Diamonds ended the innings on 226-9 giving Lightning a good score to chase down.

It was a solid start from Lightning’s opening batters Beaumont and Sarah Bryce who settled in at the crease with ease, picking out gaps in the field and running well between the stumps to get Lightning on the score board.

Punishing any wayward ball’s, the pair eased their way to a 50 partnership, then each earned a 50 of their own. The partnership built to an impressive 117 when it was dismantled by Smith, as she sent Beaumont to the changing rooms and the Bryce sisters where once again reunited at the crease.

The reunion was short lived however, as some fast paced bowling from Brunt removed Sarah Bryce for 57 and Lightning’s Bethan Ellis joined the chase.

Lightning’s attack was halted slightly in the 36th over by some aggressive bowling from Sciver dismissing both Ellis and Higham. It was Ria Fackrell’s opportunity at the crease next, making her debut appearance for Lightning.

Leading on the field with both bat and ball, a massive 6 from Kathryn Bryce brought up her 50 runs. With 3 overs to go and 24 runs needed, Fackrell lofted the ball in the air, finding the hands of Winfield-Hill and leaving the field for 8.

Both Graves and Harman joined the fray, only to be dismissed within a couple of balls, leaving Kirstie Gordon to join Kathryn Bryce to face the final few balls. The total proved too much however as Diamonds secured the win by 9 runs.