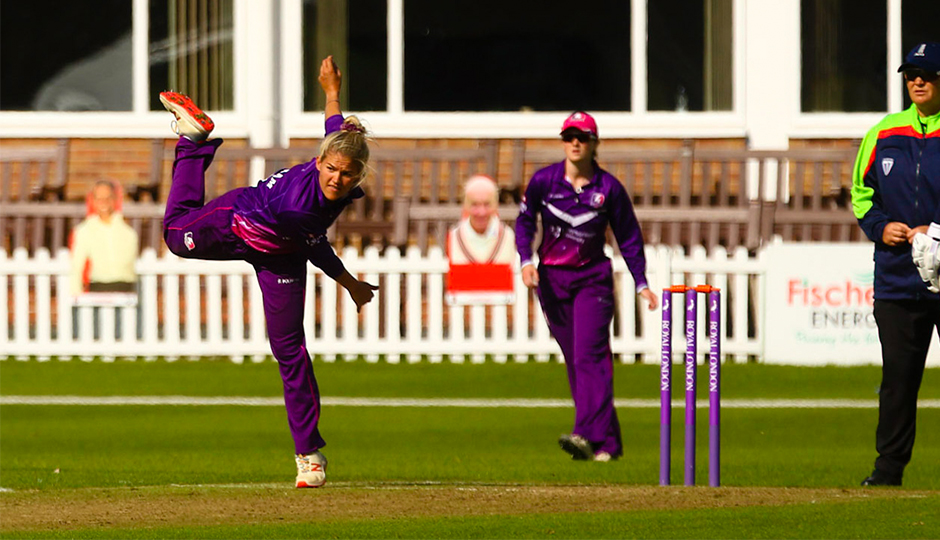 With Tammy Beaumont returning to the England squad it was Bethan Ellis that joined Sarah Bryce to open up the batting. Both batters looked comfortable as Lightning’s score rocketed to 50 in the first 8 overs.

Shortly after the landmark was hit, Ellis fell lbw to the spin of Levick and a swinging ball from Gunn quickly saw off danger woman, Captain Kathryn Bryce for 7.

Seemingly now a habit, S.Bryce punched her way to another 50, building a strong partnership with Abbey Freeborn as they looked to set Diamonds a high score to chase down.  However, the momentum was soon halted as a lofty ball from S.Bryce was caught by Langston, ending the pairings swift scoring partnership.

The wickets kept tumbling for Lightning as both Freeborn and Lucy Higham were swiftly dismissed by the Diamonds attack. Lightning needed a batter to stabilise the innings and that is what they got from Teresa Graves, she built her innings, looking strong and calm with bat in hand.

With 5 overs to go, Grave’s stint at the crease ended and Lightning debutants, Pai and Kellogg had their opportunity to add to the home team’s total. Swinging hard, Pai managed 9 before being caught in the outfield, with Kellogg getting runout for 0. It was down to Grace Ballinger and Alicia Presland to see out as many balls as they could and set a competitive score. With 5 balls to go, Presland was caught in the deep field setting a target of 226 for Diamonds to chase down.

With ball in hand, Lightning looked deadly. K.Bryce and Kellogg opened the bowling with ferocity, firing balls at the opening batters. It was Kellogg that struck first, closely followed by K.Bryce as the pair swiftly saw off Hopkins and Kalis in the opening 6 overs, both lbw.

In the 18th over it was debutant Presland that took the big wicket of Armitage, rocketing the ball at the stumps, forcing the batter to lift it into the air and the safe hands of Ellis.

Patient bowling from Lightning’s spinners followed. Their patience payed off, when three wickets fell in consecutive overs, Higham taking two - sending the bails flying, whilst Harman forced a catch, stopping Diamonds in their tracks and giving Lightning the momentum.

It didn’t take long for Harman to strike again, as Lightning’s tight fielding forced Diamonds into making some crucial mistakes.

Next in for Diamonds however was former Lightning duo Gunn and Langston, who pulling on their experience, rooted themselves in at the crease allowing their side to get on track to take the game to the wire.

Their partnership was finally cut short by Harman, as she claimed her third wicket of the day, dismissing Langston lbw with 5 overs to go.

It wasn’t to be Lightning’s day however, as with only minutes to spare Gunn reached her 50, and Graham found the boundary, enabling Diamonds to surpass the Lightning total, 229/8* and clinch the win.