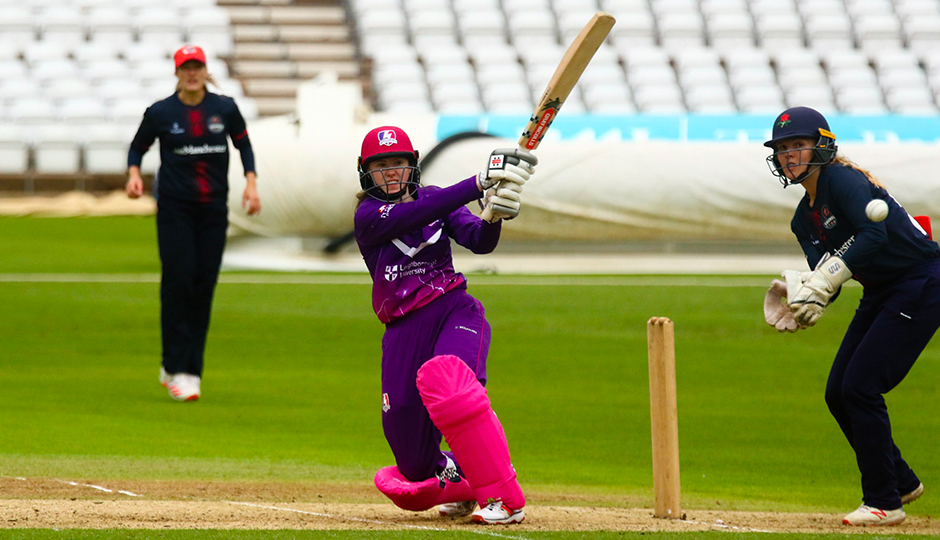 The ground started bathed in sunshine for Lightning Cricket’s opening game of the Rachael Heyhoe Flint Trophy, however the clouds came rolling in as the players took to the field.

Lighting looked threatening from the outset, with the dynamic duo of Sophie Munro and Tammy Beaumont dismissing Thunder’s Marshall and Lamb in the first five overs for only 13 runs.

Some brilliant fielding from the Bryce sisters saw the back of Thunder’s opener Boyce before the end of the 10th over, applying some early pressure to the away side.

As play continued Lightning needed a breakthrough as the Thunder pairing of Threlkeld and Brown got into their stride notching up an 82 runs partnership and getting their team back into the game. The home side had to be patient, as it wasn’t until the 27th over that a runout by Freeborn ended the pairing, dismissing Brown and giving Lightning back the momentum.

The wickets kept coming thick and fast as Gordon and Higham got in on the wicket action, reducing Thunder to their final few batsmen before Ecclestone found form, scoring 60* enabling her team to post a score of 206 for Lightning to chase.

It was a strong start from Lightning’s Sarah Bryce who wasted little time getting into her stride, punching Brown to the boundary three times in the third over.

Shortly after it became a Scottish affair as she was joined at the crease by sister Kathryn, a pairing that reached a partnership of 52. Joined in the middle by Freeborn, Sarah Bryce notched up an impressive 52 before being bowled by Eccleston.

The weather had its moment during the afternoon session, the players heading off and on the pitch with frustrating regularity.

Play resumed and an aggressive bowling spell from Thunder saw the quick dismissal of Ellis.  Higham joined Freeborn at the crease.

Unperturbed by the weather, Higham came out swinging, matching her partner Freeborn blow for blow, leading the home side batting attack.

Yet again rain interfered in play, putting a halt to the fast pace scoring of the duo, who returned to the field to face five final overs. On returning to the field Thunder’s bowling attack was fierce sending Lightning wickets tumbling.

In a valiant effort to score eleven off the final six balls Lightning’s tail end batters swung hard. It wasn’t to be however, with Thunder’s Ecclestone taking the final two wickets and clinching the win for Thunder by 4 runs.