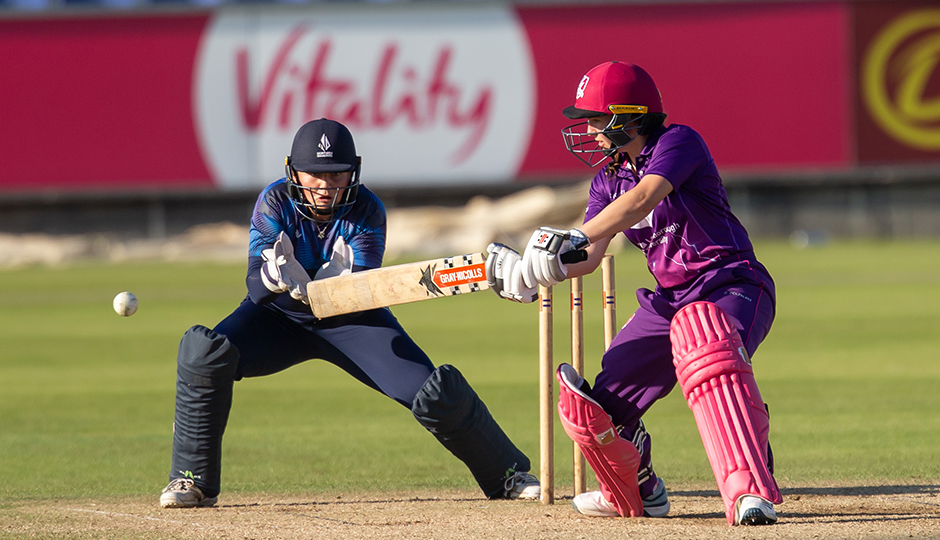 Lightning captain Kathryn Bryce is confident going into Saturday’s clash against the Northern Diamonds who currently sit in top spot of the North group after edging their way past Lightning on Monday.

Facing Thunder in the Rachael Heyhoe Flint opener, Bryce’s side fell four runs shy in a rain affected afternoon at Trent Bridge. In their second fixture away to the Diamonds, it was the difference of nine-runs despite inspired performances from both Bryce sisters.

“I think the majority for about 80% of the first two matches have gone our way and we've performed really well in and it's just that last little bit to get us over the edge and winning the games of cricket that we’ve probably just fallen short on.

I think going forward we've done a lot of good stuff but it’s just keeping that going for longer.”

On Monday, all-rounder Kathryn annihilated the Diamond’s top order with the ball (5-29) and paired this with an unbeaten knock of 71* . Whilst, Sarah Bryce added 57 in an opening hundred partnership with England stalwart Tammy Beaumont (52).

“We knew they had a really strong batting line up so I knew I needed to go in there and bowl as consistently as possible and put them under as much pressure as possible and make sure I didn’t  give them anything easy to get off strike with. Then the wickets kept falling from building that pressure."

“It’s always good to have someone opening up going on to score 50 for you as it sets the innings up for the rest of the team.

I think if you lose a few wickets early on you sometimes feel a bit more pressure in the middle order so for her to open up and score 50s in both those games is good although she will probably want to kick on and go a little bit further.

But to set that platform for us is really great."

Lightning now go into Saturday’s home fixture versus the Northern Diamonds for a second time without their two England stars Kirstie Gordon and Tammy Beaumont.

“I think it’ll give other people to stand up and play a good role in those middle overs like Kirstie did and someone else to stand up with the bat as well.

But, I’m really looking forward to it, we put in such a strong performance last weekend and Nat Sciver held them together with the bat and I think there will be quite a few new faces in their team so we need to go out there with the same confidence and not be too complacent that we’ll do the same again. But know that we have put a lot of their lower order under pressure and they’ll be coming in earlier on than they’d want to.

Also, a lot of their bowling attack will be different as well as they had a lot of England players in that bowling attack so knowing we did what we did against their best players gives us that confidence to take into Saturday.

So hopefully with the experience we have had from Tammy and Kirstie we can keep that momentum going forward."