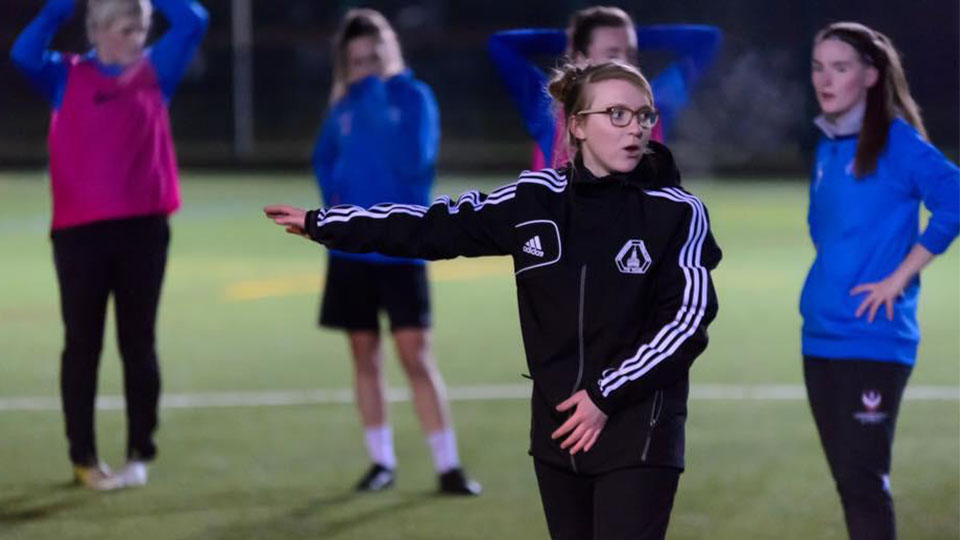 Issy joins the University from Loughborough Foxes Football Club, where she holds the position of First Team Manager of the Tier 3 FA Women’s National League side as a UEFA B licence Coach. Issy will remain as manager at the Foxes alongside her new role at Loughborough.

The appointment, the first role of its kind at the University, will see Issy take charge of the strategic planning, organisation, and coaching of the Women’s Football Programme. Issy will also be responsible for coaching the women’s first team for British Universities & Colleges Sport (BUCS).

She will bring a wealth of experience and knowledge to the position having previously worked at the Football Association as a coordinator in women’s coach development, and latterly at Loughborough College as its programme lead for Diploma in Sporting Excellence in the Women’s Super League Academies.

On her appointment, Issy said:

“I am incredibly excited and feel very privileged to be appointed as Loughborough University’s first full-time Women’s Head Coach. I can’t wait to get started with the players, coaching staff, and committee, immersing myself in the University’s high-performance coaching culture, continuing the progress of the club as we aim to become the best women’s football programme in higher education.”

Issy is no stranger to the University having completed a degree in Sports and Exercise Science in 2015:

“I graduated almost four years ago, and I have a great understanding of how the club runs, the importance of the committee and how special the environment is here. I’m looking forward to putting into the practice my experience of coaching in the women’s pyramid and working with young talented female players as we look to grow the programme further.”

Talking about the investment Loughborough University has placed on the women’s game, Issy added:

“I think that it’s fantastic that the University has invested in the programme and can see the potential in women’s football. As the women’s game continues to develop, the role of higher education and dual-career opportunities for female footballer’s equally grows in importance. It is therefore vital that Loughborough’s programme meets the needs of the sport and provides a platform where players develop to play at the highest level whilst also receiving a world-leading education.”

“Issy’s appointment shows a real sign of intent for Loughborough as we grow our Women’s Programme. She’s an extremely talented coach and we are thrilled to have her on board.”

Issy’s first game in charge will be in the BUCS Premier North v Edinburgh on Wednesday 2nd October, KO 3pm.