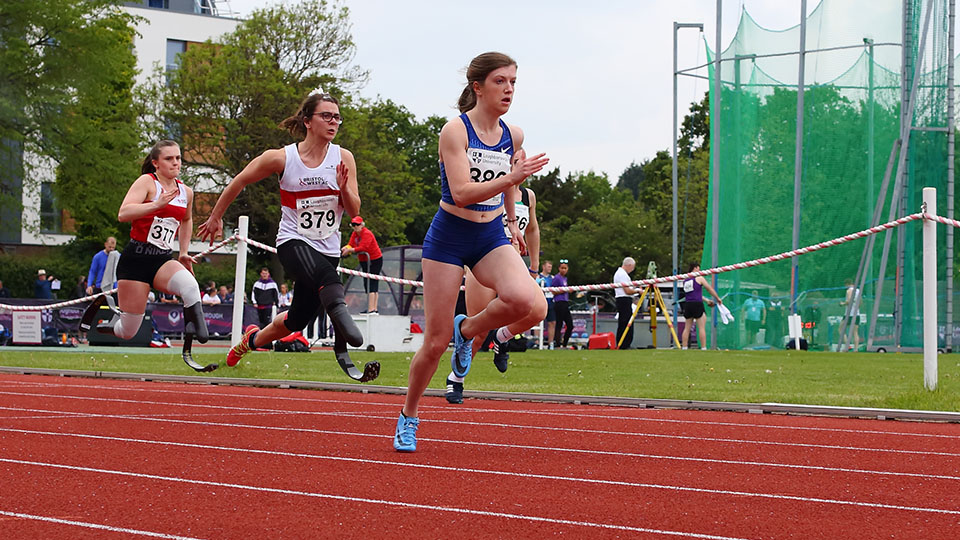 The annual competition, which takes place at Loughborough University’s Paula Radcliffe Stadium, saw the 22-year-old from Nottingham clock a time of 12.43s - in only her third 100m race of the season - to break her own record in front of a jubilant crowd.

Speaking after her victory, Sophie said:

“I’m so surprised and I can’t believe that just happened. I didn’t expect that. This is only my third 100m race and [that] shows I’m in good form.”

Elsewhere, there was great success for Loughborough athletes, with the impressive Meghan Beesley winning the Women’s 400m Hurdles in a time of 56.72. Niamh Emerson fought hard for a third-place finish in the 200m heat, with Great Britain’s Amy Hunt turning heads as she secured the best time of the day, crossing the line in 23.17.

In the Men’s, Loughborough’s Will Fuller recorded a dominant victory in the 3000m, beating an African Violet heavy field roaring home in 8:13.26. In the 200m, a strong performance from Sam Miller saw him prevail against a talented line-up with a splendid run of 21.03.

The Great Britain Under-20 team also impressed throughout the day. Lucy Hadaway won the Women's Long Jump with a season's best 6.34m and Sophie McKinna hit the World Championship standard in Shot Put with a throw of 18.04m.

In the Men’s 100m, Jeremiah Azu secured a personal Best of 10.27 and Amy Hunt’s excellent day was completed by romping home in the Women’s 100m with another personal best of 11.31.

After a thrilling event of first-class athletics, it was England’s team that secured the ‘Battle of the Nations’ crown with a score of 210.

A full breakdown of the day’s results can be found here.