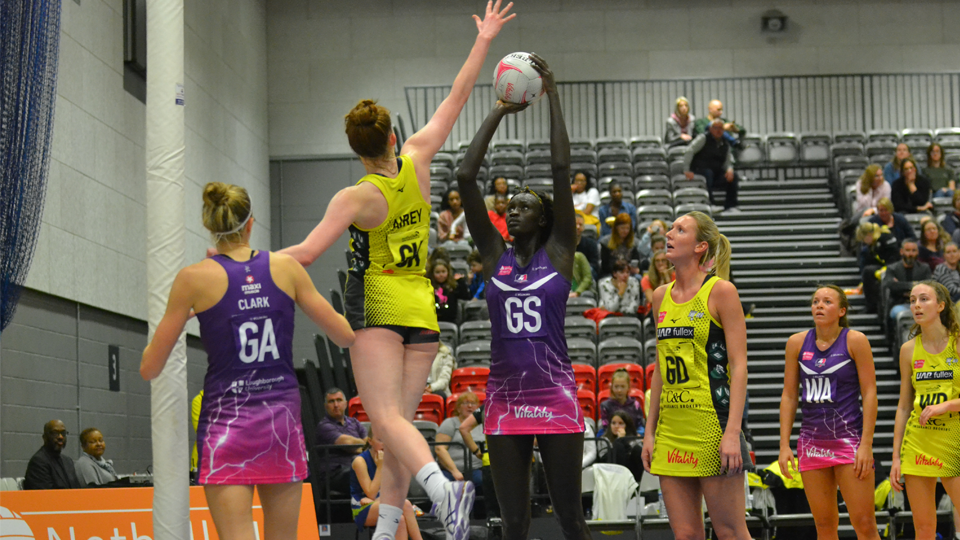 Loughborough Lightning secured their third win of the season on Saturday night, knocking Manchester Thunder from the top spot in doing so with a 65 – 60 victory.

Travelling to the north west, Lightning were eager to put last week’s loss behind them and bring their A game against a strong unbeaten Thunder. With a strong history of closely fought matches and shock results between the two sides, this clash showed matched that description right down to a tee.

Coming off the back of a tough loss at home last weekend to Team Bath, Lightning had all to play for and a lot to prove going into this weekend’s match. Renowned for their loud crowds and physical play, Manchester Thunder had yet to secure a loss all season and were looking to continue with their streak.

Sitting just behind defending champions, Wasps in the league table, Thunder went into the match flying high and began the game with a ferocity like no other. Eager not to let mistakes get the better of them this time, a solid start for Lightning gave them the confidence needed to match Thunder goal for goal for much of the opening quarter. Dynamic duo, Clark and Cholhok worked closely together to cover off all areas of the circle, despite Lightning alumni Rebekah Airey’s best attempts. Down at the other end of the court, Keenan fended off the physical digs from Thunder attack to keep her cool and force error in their attack. The quarter ended with both sides level.

Eager to push on and put the score-line in their favour, Lightning made no changes to their line-up and instead looked to continue with their style of play and look for every chance possible to steal the ball. With the notorious ‘Thunder drum’ ramping up its presence it was down to captain Nat Panagarry to match the noise providing words of encouragement throughout the court as her team continued to keep their composure and press on into half-time.

The team returned for the second half with no changes once again, despite Thunder making changes to its line-up with England Roses cohort Laura Malcolm and Ellie Cardwell taking to court. Famous for their 3rd quarter break through’s the crowd were soon on the edge of their seats as Lightning quickly took the lead for the first time.

With Joseph and Shaw sending smooth looped balls into Cholhok who was supported by Clark’s ability to sink a ball from the edge of the circle, the score line stayed in Lightning’s favour for much of the quarter. Meanwhile at the opposite end, Thunder increased their physicality in a bid to fend off Lightning defence. Ignoring the rough and tumble, Keenan and Oyesola covered off Thunder’s attacking circle forcing balls wide and stopping play at every opportunity.

Just three goals ahead the game was far from secure and Lightning had to muster all their reserve energy to press on and steal the victory from the home side. Once again, the starting seven returned to court with a fierce determination on their faces. With both sides fighting tooth and nail to hold the ball, three minutes passed without either side scoring a goal, however that didn’t last long. Capitalising on cautions and penalties from Thunder’s increasing brutality, Lightning opened up the scoring. Thunder retaliated quickly, closing the gap to just a single point with seven minutes to go before calling a stop to play to make changes to their shooters in a last-ditch attempt to salvage the game. Ignoring the fresh legs and changes to play, Lightning seized the opportunity to push on and left a floundering Thunder to adjust, widening the gap to 5 points. Finally, the last whistle sounded and Lightning were named victorious.

Returning to her old stomping ground, this time as Head Coach for the opposition, Lightning’s Sara Bayman’s reaction at the final whistle was one for the cameras;

“I think we were a lot more clinical tonight across the entire game, we took much more ball to goal and defensively we put them under a lot of pressure which really told in the final quarter. It was definitely a performance the girls should be proud of tonight.

“It’s been a tough week, it’s always the case after a loss. We’ve worked hard gone back to basics and gotten it clear in our minds what we want to achieve in both attack and defence. We’ve done a lot on just believing how good we are and that we can match up to some of the stronger sides, we’re a very good team and we just need to consistently show it. Hopefully today we did show that and we probably sent some shockwaves through the league at the same time.”

Captain Nat Panagarry touched on the importance of tonight’s win going into the next few rounds;

“We know when we come to Thunder that it’s going to be loud and it’s going to be physical and we’ve been training really hard this last week. We knew our performance against Bath last week wasn’t good enough and you can get punished in this league as that showed. Hopefully tonight we’ve sent a message out and showed what we’re capable of and what we can do.”

Lightning are back on the road next weekend as they travel to Surrey Sports Park to face Surrey Storm. Currently equal on points, the clash is set to be another nail-biting encounter.

Lightning return home on Saturday 2nd March to welcome new side London Pulse to Loughborough University. Tickets are on sale now and can be found here.