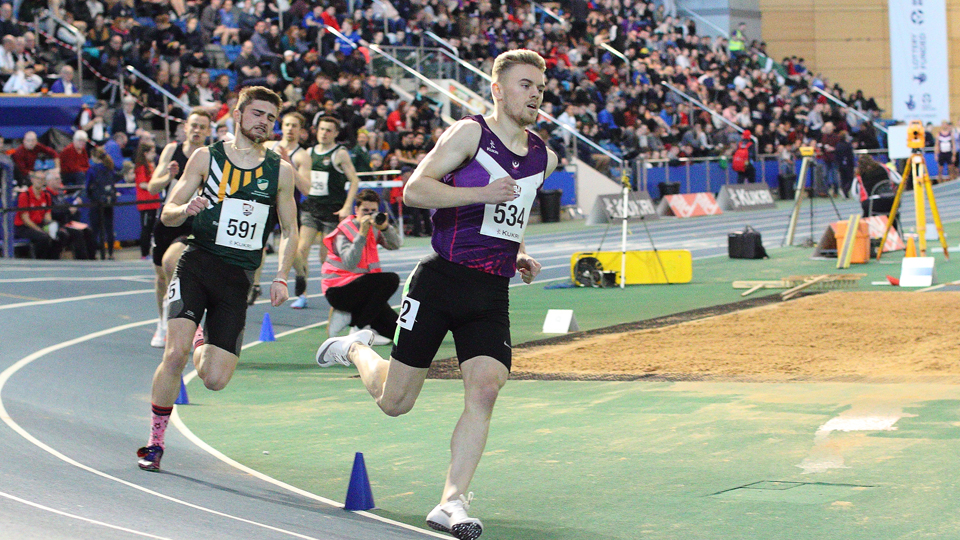 As Loughborough Students Athletics Club descended to the EIS in Sheffield last weekend, they proved just how much the hard work of being student-athletes pays off. With an impressive medal haul, Loughborough were named BUCS Indoor National champions.

African Violet vests dominated both track and field, and the medal count steadily increased throughout the course of the weekend. Loughborough cruised through their heats to secure places in some extremely exciting semis and finals. Only one day into competition, Loughborough were setting the tone, and showing their opponents that they were a force to be reckoned with. Zak Skinner and Ben Foulston sailed through the ambulant 60m rounds, proving a great watch. Skinner taking bronze, the first medal of the weekend.

On the Sunday, Loughborough athletes were running, jumping, and throwing their way to victory. Heptathlete Ellen Barber claimed bronze in the shot put with a throw of 12.98m, as well as putting a new indoor long jump PB under her belt. Triple jumper Henry Clarkson also put in a great shift in the final and took away a silver medal. Sam Khogali also added to the medal tally with a bronze in the long jump. There was also an unbelievably close call from Morgan Lake, who bowed out after 1.86m and an attempt at breaking her own joint British record that she holds along Katarina Johnson-Thompson. An excruciating 0.01m away from a new BUCS Record, she still took home gold. These were standout highlights amongst top field performances from all those involved from the Loughborough party.

Back to the track, there were multiple athletes donning African Violet in semi-finals and finals. Ellis Greatrex smashed his 400m heat and semi-final and took a respectable 5th in a rapid final that concluded with a close photo finish. Rosie Johnson took bronze in the 1500m and Emma Alderson put in a spectacular performance in the 400m Final, but unfortunately within the last 10m took a fall just as she was about to break through into gold medal position.

What might have been the highlight of the weekend for Loughborough Athletics, however, was the final of the 4x200m relay. Kris Jones, who had already won the 60m Sprint earlier on in the weekend with an impressive new PB of 6.76, absolutely stormed the anchor leg, stealing the Gold from Strathclyde University. The team put in a brilliant performance, and a University of Exeter athlete was even heard to have said ‘I never thought I’d be cheering on Loughborough’, which says it all really.

Our AU President Oren, took Thor to the track in the Mascot Race and put in an absolute shift, raising money for the Danny Porter Foundation alongside all the other University mascots.

All in all, Loughborough Athletics did themselves exceptionally proud and will now look to the outdoor season with high prospects and medal motivation.