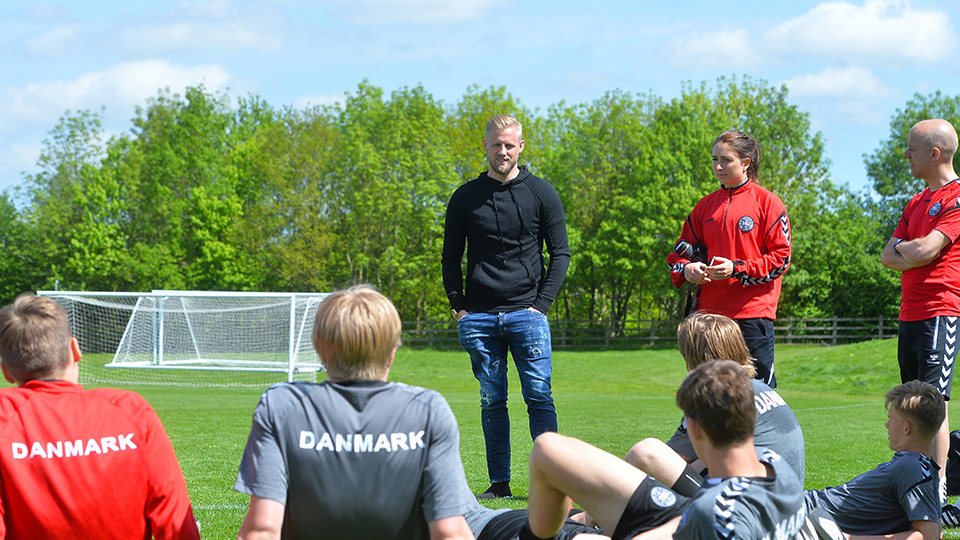 The Danish Under-17s squad were paid a special visit by Denmark and Leicester City no.1 Kasper Schmeichel last week during their involvement in the UEFA U17s European Championships.

Loughborough University is among the host venues for the competition, which has seen elite youngsters from across Europe descending on the Midlands, with the Danes taking advantage of the excellent facilities on offer.

The Foxes ‘keeper, who could represent Denmark at this summer’s World Cup Finals in Russia along with a host of his Leicester City team-mates for their respective nations, took time out from his schedule to visit his compatriots in training ahead of a group fixture.

Schmeichel, himself capped for Denmark at Under-19, Under-20 and Under-21 level before going on to collect 33 senior caps, observed a training session before taking part in a Q&A session with the youngsters ahead of their first international tournament. He gave them a vital insight into his personal career experiences – including winning the Premier League – as well as advice on how to make it as a footballer at the top level.

Several European nations are basing themselves at the University’s facilities in north Leicestershire, which is located not far from the site of Leicester City Football Club’s new state-of-the-art training facility at Seagrave.

The Club are currently preparing plans for the 180-acre site, which will add to an already impressive array of sporting facilities in the county and enhance its growing reputation for elite sport development. The exciting project will see the Football Club working closely with both Charnwood Borough Council and its neighbours to ensure the development is a success.

With a combination of world-class facilities and world-class talent, the new training facility will ensure that Leicestershire continues to bring the very best of world sport to a region that has an outstanding sporting heritage. It’s a tradition that is key to King Power International’s long-term vision for Leicester City Football Club and elite sport in the region, with the new training facility the latest example of their commitment to sustainable excellence.