Lightning Netball do the double in bank holiday bonanza 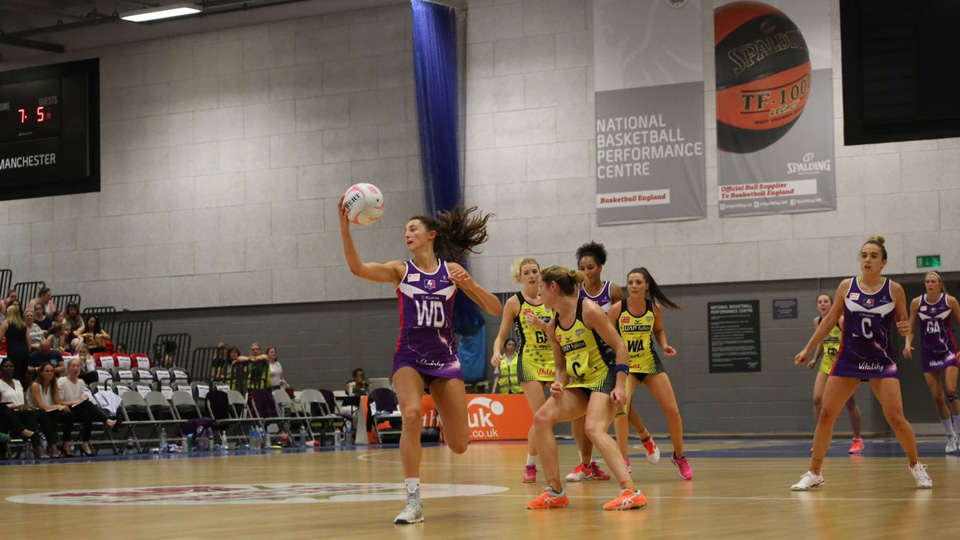 In a heated arena, to the sound of the ‘Thunder Drum’, Lightning stepped out on court for their second match of the bank holiday double header. Having secured a win on Saturday night against Team Northumbria, Lightning were eager to ‘do the double’ over Manchester Thunder. Having lost their home leg to the side by a single point, the girls in purple came out fighting, keen to rewrite the past result.

A fiery start to the match saw Lightning snatch a turnover, stealing Thunders first centre pass. Focusing back on their own centre, the visitors were quickly two points up. Leaving little time to ponder, Thunder regained composure and retaliated, evening the scores. Sterling was next to steal a rebound, giving Lightning the opportunity to push ahead once again, but not before long as Thunder’s defence began to pile on the pressure in Lightning’s circle. The quarter went on with each side claiming their centre passes before Lightning’s almighty efforts were finally rewarded pushing them ahead by two. This momentum gain was all they needed to kick start the night, the quarter ending with a well fought three point lead.

With a lead of just three, the second quarter saw neither side let up. Changing it up a gear, Lightning continued with their fast paced play, sending the ball seamlessly down the court to shooting sensation Peace Proscovia. Multiple changes to Thunder’s side saw the home side apply pressure to Lightning’s attack, keen to open up holes for turnover. Lightning, unfazed by a fresh footed Thunder, pushed on, increasing their lead to an mighty eight points. With the arena hotting up, both in temperature and pressure, both sides fought tooth and nail in an attempt to cause error and steal those much needed points. The half-time whistle soon sounded leaving Thunder trailing by seven.

30 minutes left to go and with a small lead on the board the game was far from over. Despite the efforts of the Thunder defence, Clark sent the ball sailing through the net time and time again whilst Cobden gave the crowds a taste of her gold medal performance, continually putting a stop to Thunder’s flow. Meanwhile Panagarry and Joseph became the dynamic duo that we all love, spotting crucial openings in the circle to deliver the ball seamlessly to Proscovia. A courageous effort from the Lightning side gave them their biggest lead of the match going into the final quarter.

Just fifteen minutes remained, and using all the energy they could muster, Lightning pushed on. Despite the deafening sounds of the Thunder crowd, Lightning’s work rate remained second to none. Making a single change, Carter gave Oyesola a well-earned break, bringing on Wood at the goal defence position. With changes to Thunder’s shooting circle, both sides took a few seconds to readjust before giving the final quarter everything they had. A late surge from Thunder closed the gap to just five but it simply wasn’t enough, a final goal came from Proscovia, before the final buzzer sounded, and Lightning sealed the deal.

A compelling performance from the squad tonight came at great pleasure of Head Coach Anna Carter; despite her northern upbringing, she was quick to share her excitement at beating Thunder;

“I’m really happy with tonight’s result, Thunder are a tough team and we know that we have to be at our best to come here and get a result. It’s notoriously a noisy crowd, full of energy and Thunder are a well-disciplined team who know how to win games. I think it was a turning point, being able to grind out a win against a team that are always going to keep coming at us and be able to reapply that pressure. I think the girls have taken on a responsibility to improve themselves individually in order for us as a squad to challenge those top four contenders. We’ve been building connections and working on combinations at training and all the girls have shown great professionalism, which is really coming through since the Commonwealth break.”

Monday’s win seals Lightning’s fourth win in a row since the Commonwealth Games break. Now firmly in contention for a top four playoff spot, Lightning will look ahead to their next match vs Celtic Dragons which takes place on Monday 14th May in Cardiff.