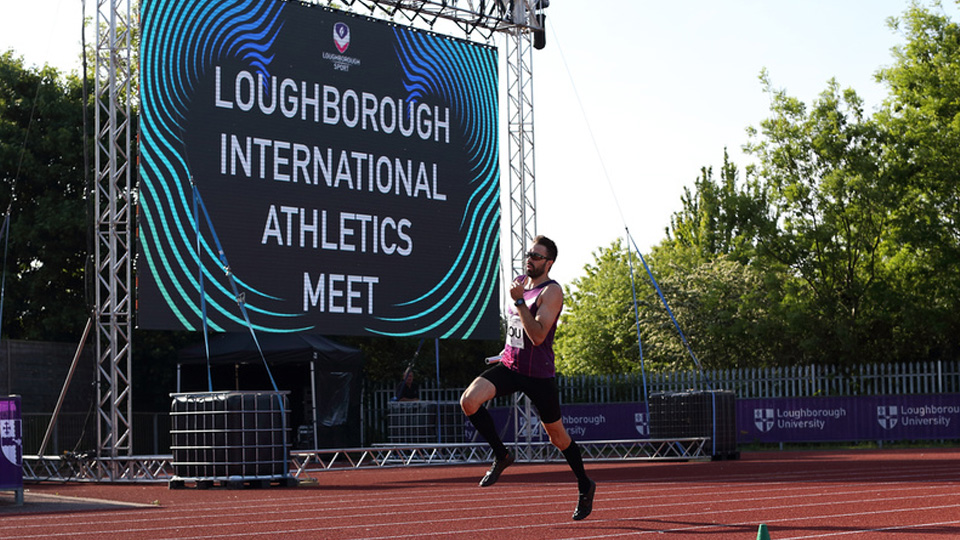 On a beautiful summer’s day the 2018 edition of the Loughborough International Athletics meeting lived up to its tag line, ‘reaching new heights’ on a number of fronts.

In front of some 3,000 spectators, there was quality action both on the track and in the field, with the weather and the new big screen at the far end of the stadium providing the perfect backdrop.

For the hosts Loughborough University there were a number of impressive winners, none more so than final year Human Biology student Jess Judd, who broke clear with two laps to go to win the women’s 3,000m. In a lead group of three, Judd took it on with 1,000m of running remaining, dispatching her two rivals to finish well clear and stop the clock in 9.05.16.

Of her run Judd said:

That was so nice. Since the Commonwealths I haven’t had my head in gear – I gave it everything but came last, so I was just gutted. I’m really happy with that and the time was good, as it was slow to start with, but I just wanted to go out there and race, as all my races have just been time trials. I think that’s why I haven’t enjoyed it as much but I loved that today and I’m really happy. My course friends are here supporting too, which was really nice.

Towards the tail end of the day, with the sun finally starting to relent, Loughborough’s women’s 4x400m relay quartet showed their international rivals a clean pair of heels as they won in a quality time of 3.33.02. Having already won their individual events, Beth Dobbin and Kirsten McAslan ran the first and last legs, with Amy Allcock and Jess Turner also doing a sterling job to secure victory.

Unfortunately, as far as the team standings were concerned, the relays were all non-scoring events; however Loughborough’s showing across the board was enough to earn them a terrific second place finish in the match behind clear winners England.

English success on the day came from the likes of hot favourite Daryll Neita, who won the women’s race in 11.53. She didn’t have it all her own way, pushed hard by GB Junior’s Kristal Awuah, but ultimately the Olympic 4x100m relay medallist showed her class to take the win. Daniel Rowden ran a quick 1.47.01 to easily win the men’s 800m and ensure an England clean sweep, with Mari Smith taking the women’s race moments earlier in 2.03.23, a fine personal best. Martyn Rooney also made a rare outing over 800m, clocking 1.52.52 before returning to run a fine relay leg later in the day.

Olympian Luke Cutts won the men’s pole vault on countback at 5.30m, whilst Joe Dunderdale was victorious in the javelin and Dan Bramble prevailed in the long jump.

Scotland made a great start to the event, their captain and Commonwealth Games bronze medallist Mark Dry leaving it late to get the better of Loughborough’s Taylor Campbell in the men’s hammer. Dry, who produced a stunning final round throw in Australia to repeat his bronze medal winning feat of Glasgow 2014, produced a fifth round 72.35m in Loughborough to edge out Campbell by a mere 4cm.

After that ding-dong battle Dry, who trains at Loughborough University, commented:

Everyone has been a bit flat since the Commonwealths but training has actually picked up a bit the last two weeks. I think I can throw 74m (the European Championship qualifying standard) so it’s then all about the trials. The throw felt good today, just slow, so if I can find another gear I think it’s there.

It’s a huge honour to captain Scotland today and win in this vest, so I’ll hope to do the same again in the British vest next week.

Allan Smith, fifth at the Commonwealth Games last month, was another Scottish winner, getting the better of Loughborough’s Chris Baker thanks to a 2.23m clearance in the high jump, whilst Loughborough based Scot Kirsty Law took the women’s discus. On the track, a brave piece of front running saw Jemma Reekie not only win the women’s 1500m but record a new lifetime best of 4.11.96, whilst Sol Sweeney continued his good form to win the men’s 3,000m.

Perhaps inspired by his compatriots’ efforts Grant Plenderleith set a fantastic 46.60 personal best to steal 400m victory on the line, edging out Owen Smith by just 0.03 of a second, Plenderleith and Welshman Smith both bagging good points for their teams. The fastest time of the day however came in the guest race as GB international Rabah Yousif stopped the clock at 45.74, his fastest time of the year so far and inside the time needed for consideration for the European Championships.

Kirsten McAslan gave the home fans something to really cheer about as she stopped the clock in 59.01 to win the Women’s 400mH match race, only her fifth race at her new event, having switched from the 400m flat. Meanwhile England’s Seb Rodger won the men’s race in 49.80, inside the British standard for the European Championships, which take place in Berlin later this summer. He was pushed hard all the way by eventual minor medallists Jacob Paul and Loughborough’s Niall Flannery.

Like McAslan Jamie Williamson was another Scot securing top points for Loughborough, and wearing the African Violet he was roared home to take the men’s 1500m in 3.44.57 in a frantic finale.

Back on the track the 100m Para Events were won by Sally Brown and James Arnott respectively, whilst the men’s match 100m was won by Deji Tobais, who running as a guest finished strongly to take the win in 10.46. John Otugade went quicker to win the first guest race in 10.32.

Full results can be found here