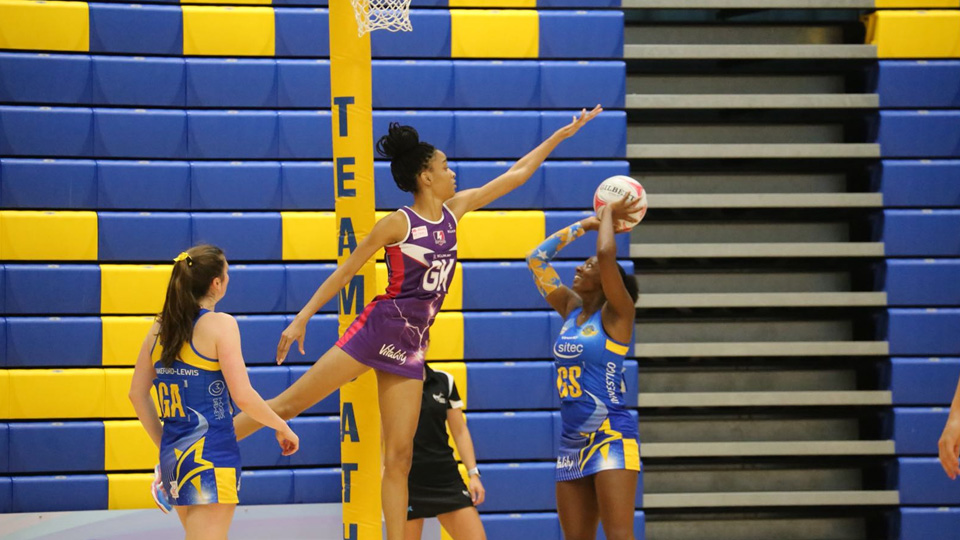 Loughborough Lightning secured their ninth win in a row on Friday night in a nail biting encounter with Team Bath which saw the visiting side come away with a single point victory, winning 43 – 42.

Having won eight matches in a row Lightning entered the encounter arguably as the favourites however having lost to Team Bath at home earlier in the season, and with both sides eager to secure a top four place, the match was all to play for.

A ferocious start to the proceedings saw both sides fire on all cylinders in a bid to gain that all important early lead. Lightning were first to add points to the board with Coleman sinking the opening shot, quickly followed by Proscovia, to give the side a two point lead. The home side were quick to retaliate, the score levelling at every possible opportunity.

Keen to push on and find the gaps in Bath’s play, Lightning returned to the court with a steely determination. Moving up a gear the team worked hard to keep the ball safe but at the same time apply more pressure to Bath’s attack. With an incredible intensity through the centre court, Joseph, Panagarry and Cobden delivered the ball safely to the attacking end where a flighty Coleman brought aid to the final stages, sinking the ball through the net time and time again. Meanwhile in defence, the solid blocks from Oyesola teamed with the extensive reach of Sterling left Bath looking behind for support. The half ended with a four point lead for the visitors.

Despite their lead, Lightning left nothing on the bench going into the second half, increasing their speed to give the crowds a taste of their magic. Interceptions from Cobden on the circle edge dampened Bath’s rhythm, causing them to look elsewhere than the safety net of Commonwealth gold medallist Kadeen Corbin. Changes to Bath’s attack gave Lightning a crucial adjustment period, enough time to widen the gap in the score line to ten at the end of the quarter.

Far from safe, a huge 15 minutes stood between the two sides. A win for Lightning would secure their place in the top four and rewrite their previous encounter with Bath, the last game they lost this season. Summoning their 8th player in an 1100 strong crowd, Bath really stepped up to the challenge, eager to become the ones to knock Lightning from their pedestal. Swapping Coleman for Essam, the young shooter stepped out with a huge role to play, just hours after completing an A-level exam. Deafened by the crowd, Lightning had to muster all that remained inside of them in order to seal the deal Bath however had other things on their mind. A serious of misfortunate errors on Lightning’s behalf quickly shortened their lead to just five with as many minutes left on the clock. The sudden change of events, and surge in the opposition’s game play, forced the final few minutes of the match to become increasingly heated and pressurised, with all to gain and all to lose. The clock ticked down and each stop in play seemed to go in the favour of the home side leaving Lightning fighting to save the game. The final seconds passed with each member of the crowd gasping for air in the anticipation of that final whistle. The sound finally rang out across the arena, ending the game and securing Lightning’s victory.

Head Coach Anna Carter was keen to highlight the importance of tonight’s win;

“We knew tonight was going to be tough, we knew Bath were going to bring it and make things difficult for us and they we needed to play our best netball. I’m not sure we did that, Bath exposed our weak areas and used them to their advantage especially in that final quarter. Tonight was a great opportunity for us to test some of our other players, we had two goal attacks out there tonight who really showed us what they can do and it’s great to be able to give them that chance at this stage in the competition. Our focus now is to recover, regroup, refocus and go again next weekend.”

It was a standout performance for the second week in a row from Captain Nat Panagarry, despite the challenges of playing to the sound of an electric home crowd;

“It was a tough match tonight, we knew it was going to be a challenge, Bath have a strong squad with a lot of depth so to come away with a win was great after a tough week for us. I’m so proud of each every person in the squad today it showed true grit and determination for us to keep fighting and secure that win. Credit to Bath for pushing us, their home crowd was phenomenal tonight, we now need to work on how we react to pressure and come back even stronger.”

The win comes as Lightning’s ninth in a row and thus cements their place in the top four. The battle is far from over as Lightning continue to bid for a top two finish which would take them into the semi-finals with a home court advantage. In just seven days they travel to University of Essex to face fellow top four contenders Benecos Mavericks in the penultimate round of the Vitality Netball Superleague.

Make sure you’re following @LboroLightning on Twitter for live updates on the game. 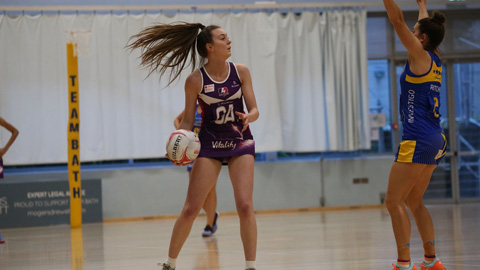 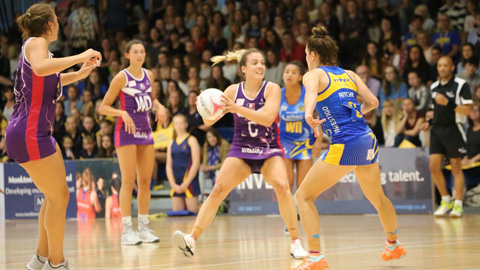