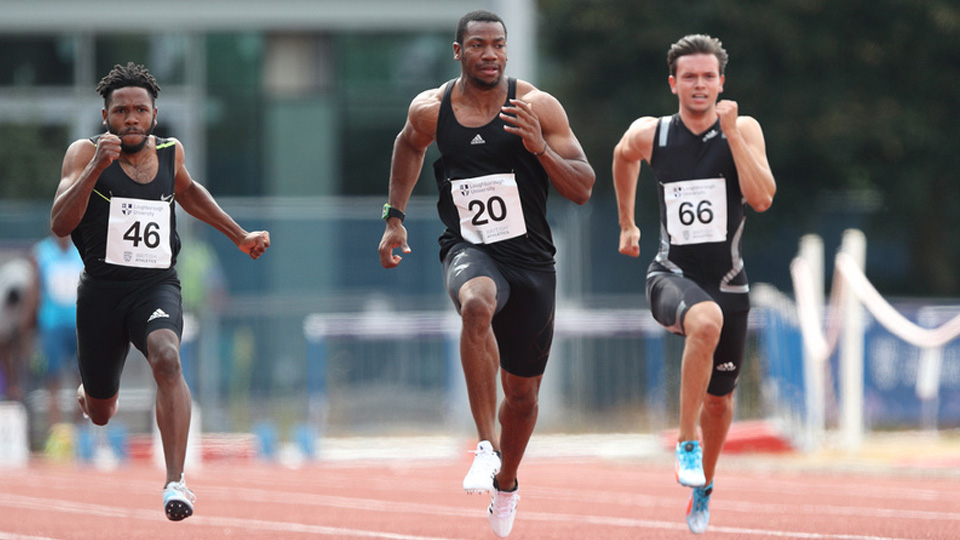 On a sizzling hot day at Loughborough University’s Paula Radcliffe Stadium there were a number of superb sprint performances, even if Yohan Blake’s false start in the men’s 100m final did leave fans a little disappointed.

Having run 10.34 in his heat, Blake was drawn in lane four with Harry Aikines-Aryeetey in three and Ghana’s Sean Safo-Antwi outside him in lane five. Eager to get out of the blocks well and back up his 9.95 run at the Anniversary Games, Blake went a little too early and was DQ’d. That left the door open for another victor and local favourite Aikines-Aryeetey needed no invitation, taking the win in 10.42.

Blake’s compatriot Simone Facey fared slightly better in the women’s race, as she won both her heat and final, the latter in 11.51. Britain’s Ashleigh Nelson was the fastest qualifier with her 11.60 time to win the other heat, but she withdrew from the final leaving Facey to take a comfortable win.

Alicia Barrett produced her best run on British soil for 12 months to win the 100mH against a quality line-up. Having qualified fastest, the European Junior silver medallist backed it up with a 13.26 winning run, her fastest run since the Commonwealth Games four months ago. Loughborough University student Megan Marrs finished fastest to move through for second place in 13.42, just a tenth down on her lifetime best set this year, with Jess Hunter third in 13.53.

Another student, Tom Somers, was in personal best form as he finished second in the men’s 400m in 46.91. Second to Sudan’s Sadam Koumi, Somers shaved one hundredth of a second off his previous best set last year as he continues to recapture the form that saw him win World Junior 200m gold in 2014, after a number of barren years due to injury.

Somers returned to the track an hour later to contest the 200m, running another great race to split Canadian Brenden Rodney and Iranian Hassan Taftian, a high quality duo. Rodney finished fastest, stopping the clock in 20.59, with Somers clocking 20.63 and Taftian 20.74.

Meghan Beesley was rewarded for an aggressive run with a clear victory in the women’s 400mH. Attacking the race from the off, the Loughborough University alumna broke the tape in 55.83, less than half a second down on her season’s best as she finalises her preparations for the European Championships in Berlin. Just minutes later Beesley was back in action winning the 400m in 53.07, her fastest time since 2013, to complete an impressive quick-fire double.

In the field the men’s hammer was the main attraction, The Netherlands Denzel Comenentia edging out Scotland’s Chris Bennett, 72.14m to 72.11m, with former Loughborough students Mark Dry and Craig Murch also over 70 metres.