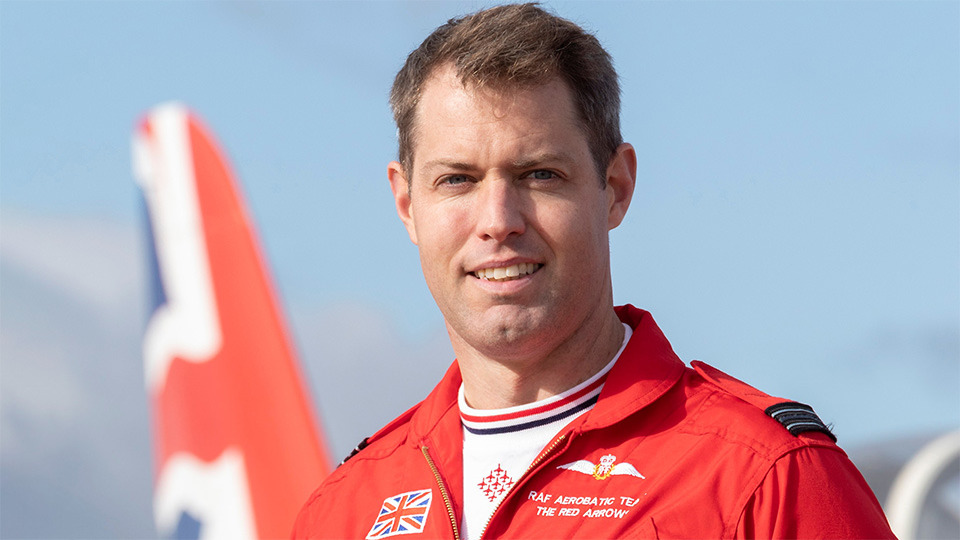 The Geography (2008) alumnus is one of three new pilots on the team who are selected following a careful interview, testing, knowledge and peer assessment process.

One of the key criteria needed to become an RAF fast-jet pilot is to have completed frontline tours and to have amassed at least 1,500 flying hours.

Flt Lt Roberts joined the RAF in 2009 and flew the Typhoon aircraft operationally. He has been involved in NATO air policing duties in Estonia and helped to secure the skies of the UK and the Falkland Islands by conducting Quick Reaction Alert.

“I vividly remember seeing the team display as a young boy but, as I have spent more time in the Royal Air Force and had more insight into how the Red Arrows operate, I was drawn towards applying by its clear, common goal and the high levels of teamwork required from everyone involved to generate a consistent, world-leading display.

“I am most looking forward to getting out and meeting people from all backgrounds and walks of life to share my passion for aviation and what the wider United Kingdom has to offer.”

Training is now underway at the home base of the Red Arrows, RAF Scampton. Flt Lt Roberts will fly one of the famous Red Hawk T1 aircraft in the Red 2 position and will train with the team throughout the winter months.

He is the third alumnus to be on the Display Team, following in the footsteps of Simon Taylor and Jon Bond – who has recently completed his term with the team having served for four seasons.

The pair were on the team together in 2018 and conducted a Flypast over the Loughborough campus for graduation. They have both delivered guest lectures at the University, sharing their experiences of the world-famous Display Team.

We look forward to following Flt Lt Stuart Roberts’ journey on the team as he takes up the position of Red 2. The new season will start around May-time next year and run throughout the summer and into early autumn.