The Government imposed a festive vacuum each December which was underpinned by the Puritan belief that the Catholic celebration was a sinful extravagance fuelled by immorality.

It was hugely unpopular, with Christmas customs – even mince pies – being banned, and soldiers patrolling the streets of London in response to pro-Christmas protests.

That didn’t entirely stop the celebrations though.

And like today’s satirical scrutiny by publications such as Private Eye and Charlie Hebdo, the satirists of the 1600s went to town on this suppression of seasonal revelry.

Published in January 1645/6, the anonymous writer of The Arraignment Conviction, and Imprisonment of Christmas, printed by someone under the pseudonym of Simon Minc’d Pye, penned an allegorical tale, which saw cruel Puritans imprisoning Old Father Christmas as a way of implementing the festive ban.

Back then, there was no concept of Santa as we know him.

The Old Father Christmas of this pamphlet, and various other publications (like the one in the image below), was more of a symbol of Christmas festivities. 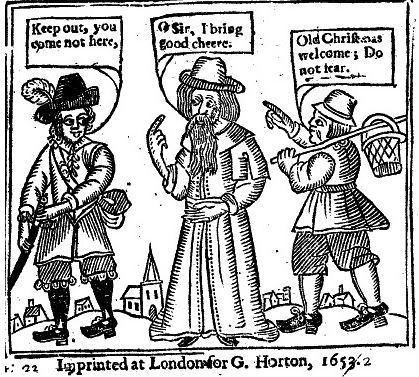 However, in The Arraignment (prosecution), he sounded somewhat familiar: a jolly, fat man, with a long grey beard, who carried a sack full of presents, and was welcomed into the homes of rich and poor alike – although he wore a glittering gold and silver outfit, rather than a red one.

Opponents of the oppressive Christmas ban quickly made him a martyr to the harsh Puritan diktat.

But, unlike modern-day satire, The Arraignment gave voice to the very ideas it seemed to be opposing.

Much of the pamphlet was spent summarising parliament’s position on Christmas because part of what it was doing was mocking both the pro and anti-Christmas factions.

So, readers learned of the origin of the ban and its theological pretext: to rid the calendar of the Catholic holidays which, to their way of thinking, lacked legitimacy.

It referenced the ordinance (law) responsible for banning the festive season, A Directory for Public Worship, which declared: “Festival days, vulgarly called Holy Days, having no warrant in the Word of God, are not to be continued.”

Christmas was now meant to be spent in quiet reflection.

And the only holy day from now on was the Sabbath.

In mitigation to these Puritan ideals, the pamphlet’s main act of opposition was to make the sympathisers of Old Father Christmas seem like heroes.

In the story, the protagonists, upon learning he was missing from prison, launched a search for him, and when they found that Old Father Christmas –  " much wasted, so that he hath looked very thin," – had broken out of the jail by squeezing through the bars of his window, they offered him refuge.

The message appeared to be ‘don’t worry, things will soon get back to normal, parliament won’t be able to ban Christmas for long.’

And this indeed was the case.

A lot of the old festivals returned in 1660, once the monarchy was restored – if indeed they ever truly went away.

And the fact that the authorities kept issuing proclamations throughout the 1650s suggests it didn’t at all.

But the story doesn’t end there.

In fact, the idea seems to haunt the popular imagination.

The 2014 British film Get Santa is not by any means a remake of The Arraignment, Conviction and Imprisoning of Christmas.

But, in much the same way, it features an unjustly imprisoned Father Christmas, played by Jim Broadbent, who has to break out of prison, and rescue Christmas.

Though we like to think of Christmas as an integral part of the festive calendar, it might actually be that we cherish it most when we think that it could be taken away.

And whether this is because, like the fictional Get Santa, or like the pamphlet from 1645 it is because of other policy decisions, we know in our heart of hearts that you can lock up ‘Old Christmas’ but no power on earth can keep him there.

Written by Dr Sara Read and Dr Catie Gill, from Loughborough English. With thanks to The National Civil War Centre, Newark.

Check out Dr Read's other festive piece on creating your own mince pie - the 17th century way - here.