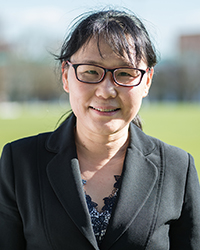 We are delighted to announce that Dr Lili Yang, a Reader in Information Systems and Emergency Management, member of the Centre for Service Management and head of the Emergency Management Research Interest Group at the School of Business and Economics, Loughborough, has been nominated for not one but two prestigious awards for her water meter system, tApp: a Times Higher Education Award for International Impact and a UK Innovation and Entrepreneurship Award.

tApp is a new smart meter and tablet app system that monitors home water usage, increases consumer awareness and reinforces water saving behaviour, created at Loughborough University as part of Europe-wide initiative motivated by global water shortages. It is a wireless device and mobile app which use sensors attached to water appliances in the home to collect data about usage and provides tailored tips and advices to the users,  in order to improve the water consumption behaviour of households.

The development of tApp was led by Dr Yang, along with her research team which include staff members within the Department of Computer Science at Loughborough.

"Assisted by our innovative, low cost and wireless sensing device – and the smartphone and tablet app – the pilot trial results in Poland and Greece show that every participating household expects to save up to 20% water consumption.

"If widely accepted by communities, then a significant contribution to tackling the world water crisis could be achieved."

In addition to the tApp nomination in the Times Higher Education (THE) Awards, Loughborough University has been shortlisted for three other THE Awards, bring the nominations to four in total for 2017:

“I’m really pleased that tApp has been shortlisted for these awards: one from academia and one from industry, illustrating the impact in both areas. I’d like to thank all those we have worked with in developing it - it’s been a real collaborative partnership.”

The Times Higher Education awards ceremony will be held on 30th November 2017 at the Grosvenor House Hotel, Park Lane, London, and the UK Innovation and Entrepreneurship awards ceremony is being held on 22nd September 2017 in Birmingham.