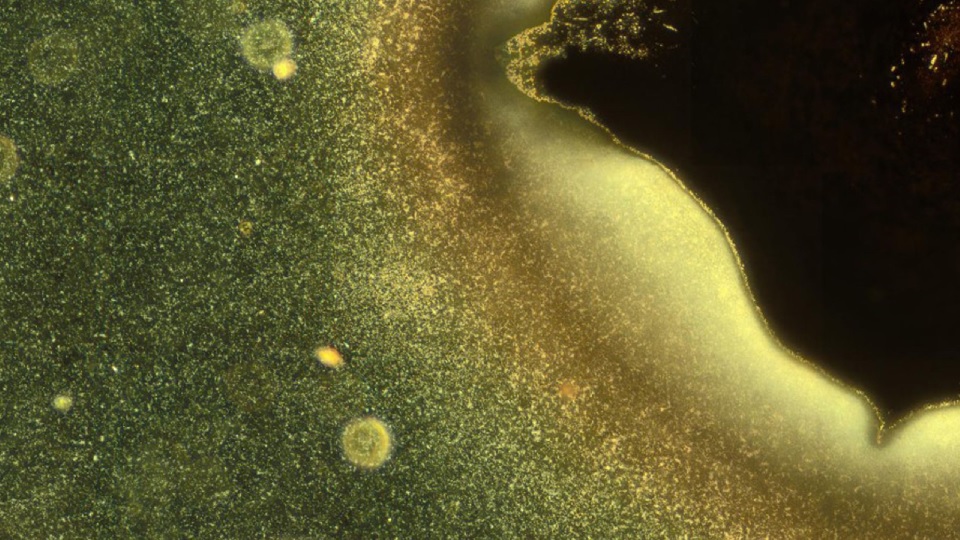 Biofilms are central to our most important global challenges – from antimicrobial resistance and food safety, to water security – and they have a significant economic, social, and environmental impact.

Biofilms are central to our most important global challenges – from antimicrobial resistance and food safety, to water security – and they have a significant economic, social, and environmental impact.

But ask a person on the street to explain what they are, and you’ll likely get shrugged shoulders.

To help the general public understand what biofilms are and why they are so important, the National Biofilms Innovation Centre (NBIC) – which Loughborough University is a research partner of – has launched the #BiofilmAware campaign.

To coincide with the initiative, VOLUME has taken a closer look at three of Loughborough biofilm projects that aim to advance this important field of work.

But first, let us explore what biofilms are and why we should study them.

What is a biofilm?

A biofilm is formed when numerous living microorganisms, such as bacteria or fungi, group together and then evolve and grow as a collective.

Without realising it, you actually see biofilms every day – examples include dental plaque, slime on rocks in streams, and pond scum.

Biofilms grow particularly well in wet areas, and the light pink areas in your shower, or the grey parts you can see in pipes at home, are also biofilms.

Biofilms are often detrimental, with biofilm infections estimated to be responsible for up to 80% of all infections in humans and animals.  ‌

However, beneficial applications in which biofilms can be exploited also exist – for example, ‘Bioremediation’ is a cost-effective eco-friendly process of degrading harmful pollutants from the air, soil, and water into non-toxic substances using microorganisms.

Gaining a greater understanding of the composition of biofilms and how to prevent, detect, manage and engineer them, would present benefits across a range of sectors, particularly in the healthcare industry where managing infections effectively is a growing issue globally.

So, what is Loughborough University doing?

From the Department of Mathematical Sciences to the Department of Chemistry, to the School of Mechanical, Electrical and Manufacturing Engineering’s Centre for Biological Engineering and beyond, important research into biofilms is being conducted across the Loughborough University campus.

Below, Dr Marco Mazza, Professor Andrei Malkov, and Dr Sourav Ghosh, give an overview of their work and upcoming research papers, with topics ranging from tackling tuberculosis using a chemical found in corals to helping the healthcare industry by developing a rapid wound detection test.

The ability to attach and implant devices in the human body is crucial in modern medicine but a big problem with their use is that they provide a surface for bacteria to colonize on and turn into infectious biofilms.

Biofilm-related infections are among the top four leading causes of death in hospitals so everything researchers can learn about the early phases of a biofilm could become a tool to eradicate them.

Through collaborations with experimentalists, the group are trying to understand the early phase in the life of a biofilm, that is, the transition from the very beginning, when there is no biofilm and simply some microbial cells swimming in a fluid, to the phase when the cells find a surface to colonise, and start reproducing on it.

One of the team’s notable successes is that they discovered a way to monitor biofilm composition and growth while the biofilm forms (paper here) – this is important as it may provide a means for medical professionals to test the response of a biofilm to different treatments that aim to prevent infection.

The researchers are currently exploring different bacterial species and their specific strategies of motion and surface colonisation.

The team’s research has the potential to aid in the development of medical applications to treat bacterial infections.

Of the research’s importance, Dr Mazza said: “Microbial life is fundamental for the ecosystem – more complex life forms in soil and water depend on the activity of microbes – and for the human body – our guts contain enormous numbers of microorganisms necessary to protect us and even to produce vitamins.

“Understanding how pathogens operate can provide additional weapons to fight them.”

TB is a global health problem and, according to the World Health Organisation, it took the lives of 1.4 million people in 2019, and a further estimated 10 million people fell ill with the infectious disease last year, which mainly affects the lungs.

There are different forms of TB, some of which are treatable and curable.

M. tb also has the ability to form biofilms inside the lungs, as well as on the surfaces of medical devices, that are abundant with these persister cells.

Bacterial persistence coupled with biofilm formation is directly associated with the failure of antibiotic treatment of TB, therefore it is important to continue to search for new drugs targeting the formation of persister cells.

Professor Malkov is working with biologists and chemists to find new, small molecules capable of inhibiting persister cell and biofilm formation in the hope it will lead to more effective antitubercular therapies.

He told VOLUME one of the team’s recent successes is the identification and synthesis of chemical compounds found in a species of soft coral that, during ‘in vitro’ experiments (commonly referred to as ‘test-tube experiments’), exhibited the ability to inhibit persister cell formation and eradicate biofilms formed by M. tb pathogens.

The team, led by the Russian Academy of Sciences, has submitted a paper on the topic and their findings to the journal Cell Chemical Biology and are currently revising the manuscript according to reviewers’ comments.

Professor Malkov commented: “We have identified a small molecule that inhibited formation of biofilms in the laboratory settings.

“The investigation is now focusing on establishing the exact mechanism of action of the new compounds and making further modifications to the compound structure to improve its activity.”

He continued: “The identified bioactive natural product analogue may serve as a promising new lead compound for developing novel antitubercular therapies relying on the suppression of persister cell formation and thus effective against chronic and recalcitrant tuberculosis infections.”

Chronic or non-healing wounds, such as in people suffering from diabetes or burns, is a severe healthcare problem.

For diabetes alone, among the 55 million people in Europe diagnosed with the condition, the lifetime risk of developing a chronic wound, referred to as ‘diabetic foot ulcer’ (DFU), is as high as 25%. In the UK, the NHS costs due to DFU are £10 billion per year and growing.

Interpreting whether a wound is going to heal or lead to a diseased state is a complex problem and as a result, it is hard to determine the best course of treatment.

Biofilms are the fundamental reason that chronic wounds do not heal in a timely manner and they form when microorganisms – most commonly bacteria - adhere themselves to the wound surface.

However, bacteria can colonize on wounds without causing an infection, so developing a test to simply get a ‘yes/no’ answer for the presence of bacteria is not massively beneficial.

Dr Sourav Ghosh, a healthcare engineering expert, and Praveen Kumar Kaveri, a PhD student in his team of researchers, are developing a rapid, simple, single-step fluorescence-based test that aims to provide crucial information on wound pathogenesis, i.e. whether a wound will heal easily or become non-healing.

The test aims to detect wound infection by determining the number and type of bacteria in a biofilm – known as the ‘bacterial load’ – and then determine the virulence of the bacteria [its ability to prevent wound healing and cause damage to the host].

Diabetic foot infection with a close-up view of bacteria.

Dr Ghosh says the research team has had promising results so far and have been able to rapidly detect bacteria quantitatively from a wound mimic sample and confirm at the same time if it is a gram-negative or a gram-positive species, which would help the clinicians in better treatment selection.

In addition, the team has had successes in quickly determining the efficacy of different antimicrobial dressings in killing bacteria.

A paper on the test and the team’s results is expected to be published in early 2021.

Dr Ghosh plans to build on the research by moving to clinical wound samples and developing the capability of detection of gram-specific bacterial load and common virulence activity markers from these samples.

“Such a test would also allow the majority of wound care and management load to be transferred from a more expensive hospital-based setting to home and primary care settings.

“Besides reducing the healthcare load, this will also allow us as a society to take better care of the frail and the elderly, particularly during this new-age pandemic situation.”

To be kept up-to-date on research conducted at Loughborough University, follow @LboroUniPR on Twitter, an account that shares news stories on the latest papers and findings from campus and LUL academics.