The Handicraft Unit at Loughborough University.

The East Midlands Training College at Loughborough was established as a training institution for engineers, and introduced a two-year course for teachers of handicraft in association with University College Nottingham in 1930. John Bridgeman, the first head of department, was a brilliant and courageous administrator with a clear vision. He recognized that handicraft teaching was largely undertaken either by trained teachers with inadequate practical skills, or by experienced craftsmen with little formal education and minimum teaching qualifications.

Peter van der Waals (known as Peter Waals), a furniture maker from The Hague, Holland was employed by Ernest Gimson and Ernest Barnsley as foreman of their new workshops in Sapperton, Gloucestershire in 1901. The furniture historian and commentator on design, John Gloag, rated Waals very highly as a craftsman and he contributed considerably to the success of the workshops and the establishment of what became known as the Cotswold tradition of furniture making.

Following Gimson's death in 1919 Waals continued to run the workshops but moved the enterprise to the nearby village of Chalford where he had easy access to the railway network. He also installed some basic machinery into the workshop – a band-saw, planer and mortiser - which enabled him to price his furniture more competitively.

In 1935 Frank Pick, chair of the Council for Art and Industry, suggested that Waals should be invited to Loughborough College to act as consultant in design. As well as working with the students on individual projects Waals designed all the furniture for Hazlerigg Hall as well as other fittings throughout the college which was executed by students. Waals adopted a formal and dogmatic approach: the students produced work inspired by the Cotswold tradition with a strong emphasis on construction. It was made in solid wood with a natural wax finish – strains and varnishes were frowned upon. Under his direction the students produced suites of sturdy oak furniture for the halls of residence especially Hazlerigg Hall, glazed bookcases and chairs for the library, refectory furniture and fine walnut furniture for John Bridgeman’s office. Peter Waals died in 1937, with Edward Barnsley taking over the role. 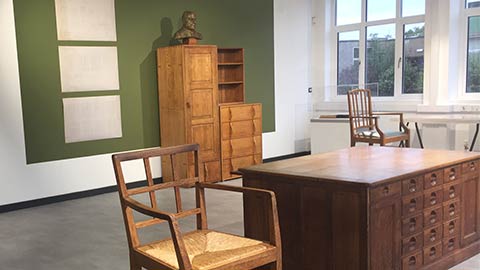 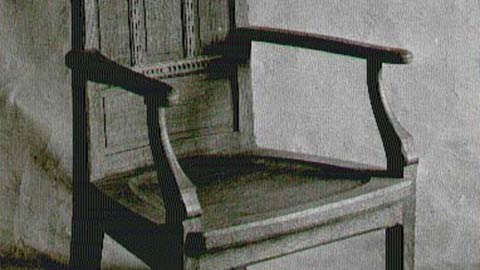 Edward Barnsley was also closely linked to the Cotswold tradition of furniture-making. He was the son of Sidney Barnsley, who designed and made furniture in the Cotswolds from 1894 alongside Ernest Gimson and had set up his own workshop in Froxfield, near Petersfield, Hampshire in 1923.

When he joined the Teachers’ Training Department at Loughborough in 1938 Barnsley worked with about forty students a year for a two-year course. Initially he spent two days a month at Loughborough increasing to three or four days a fortnight. His aim was for the future teachers to have the skills to make the subject and practice of handicraft rewarding for their pupils. Each child should understand the satisfaction to be had from making things and gain some understanding of the importance of design and craftsmanship and an appreciation of the rewards of creative manual work.

Many of Barnsley’s students recalled the inspirational but realistic nature of his role as adviser and in 1949 was awarded an honorary Diploma from the college. Bridgeman retired in 1963 and Barnsley himself was approaching retirement age. This coincided with changes in the philosophy behind the teaching of handicraft in schools and somewhat reluctantly he retired in 1968. His time at Loughborough helped him to crystallize his philosophy about furniture design and making through his discussions with students and with colleagues such and John Bridgeman and Frank Ockenden.