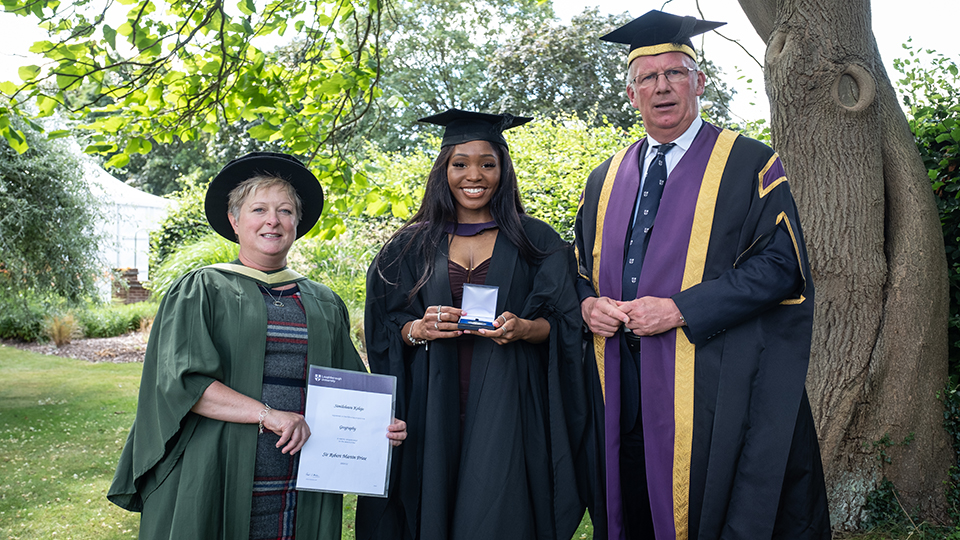 Simi presented with the award by Vice-chancellor Professor Robert Allison and Dean of Social Sciences and Humanities Professor Lisanne Gibson.

Simi Kolajo becomes the latest student to be awarded the Sir Robert Martin University prize on account of her outstanding academic achievement.

This award is the premier award of the University. The Prize consists of an award of £1,500 plus a commemorative medal and is awarded annually to an outstanding student at the University for a combination of both academic and non-academic achievement.

Simi graduated with a first-class degree in BSc Geography this summer following three years of outstanding academic achievement, plus a placement year working in GIS and digital engineering. She achieved excellent marks across human and physical geography topics, receiving a first-class mark in every single module of her degree programme. This unique achievement has been coupled with Simi’s voluntary contributions to her local area.

Simi’s excellent undergraduate dissertation – which also received The Bell Dissertation Prize from Geography and Environment - focused on how young black people experience living spaces at University, contributing to current debates in human geography. This summer, Simi completed a Fi Wi Road Internship which focuses on freeing up futures for Black British Geographers. This was supported by the Black Geographers network, Antipode Foundation, and in collaboration with the Royal Geographical Society and Society for Caribbean Studies.

Simi will begin a PhD in Human Geography this autumn, continuing her journey at Loughborough University with a research proposal focused on “Black geographies of (dis)comfort: Young people, transitions and home”.

Robert Martin was a member of a distinguished and a very long-established Leicestershire family. He was educated at Eton and King's College, Cambridge, where he read Mechanical Engineering. After working as a railway engineer, he enlisted in the Leicestershire Regiment in the First World War. Eventually wounded and invalided out, he was awarded the Companionship of the Order of St Michael and St George (CMG) for wartime leadership and gallantry.

In 1924 he was elected Chairman of Leicestershire Council, a post he held until 1960. He was also Chairman of the County Education Committee and it was in this capacity that he made a major contribution to the development of Loughborough College, the predecessor to the University. Elected to its governing body in 1922 and its chairman from 1940 to 1960, he together with Sir William Brockington, the long-serving County Director of Education, and Dr Herbert Schofield, the college principal, formed 'the triumvirate' which fostered the remarkable growth of the college.

In 1939 he was knighted for his services to local government and education; in 1958 he attended the christening of Martin Hall, named after him, on the campus; and in 1959 he was awarded a Doctorate of Law by Leicester University. He died in 1961 at the age of 86.