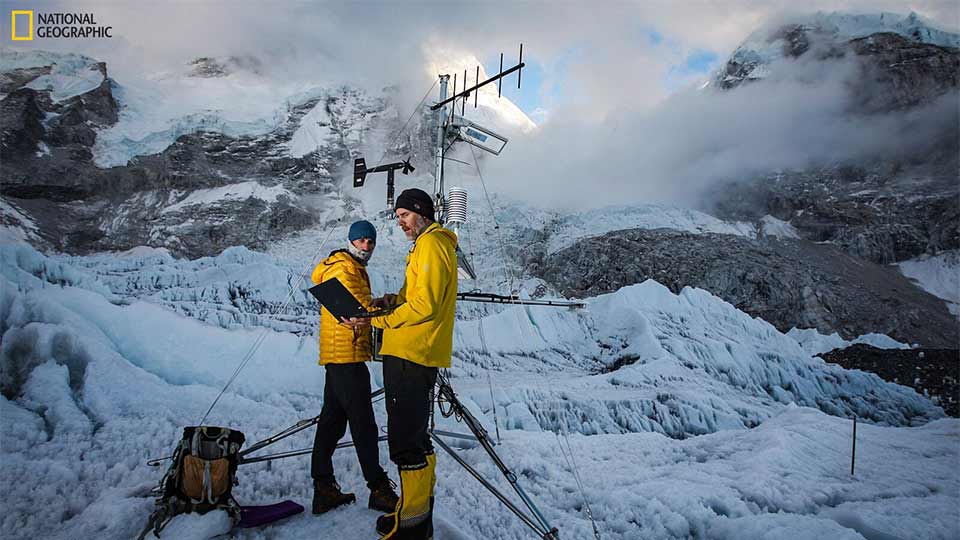 A climate scientist from Loughborough University was part of the team that installed the two highest weather stations in the world on Mount Everest to enable communities to respond to climate risks.

Led by the National Geographic Society and Tribhuvan University in partnership with Rolex, Dr Tom Matthews joined a team of international scientists, storytellers, and climbers on a two-month expedition, to research into the effects of climate change on the glaciers and the environment on the mountain.

Two weather stations were installed by Dr Matthews, Dr Baker Parry from Appalachian State University (North Carolina, USA), and a team of Sherpas, and sit at 8,430 meters and 7,945 meters. A further three stations were also installed.

They will provide researchers, climbers and the public, with near real-time information about mountain conditions.

Each station will record data on aspects such as temperature, humidity, wind speed and wind direction.

Previous studies have shown that the glaciers are rapidly disappearing due to increasing global temperatures.

Little is known about future impacts their disappearance could have on the lives and livelihoods of the more than one billion people in the region, who depend on the reliable flow of water the glaciers provide.

As well as installing the weather stations, Dr Matthews will also help to monitor the upper atmosphere, which is critical to tracking and predicting weather patterns around the globe.

The National Geographic Society believes the research is the most comprehensive single scientific expedition to the mountain in history.

Dr Tom Matthews, of the University’s School of Social Sciences, said: “This research is important across a range of scales. Locally, the installed weather stations will enable us to improve weather forecasts on Everest, making the mountain safer for those trying to climb it.

"They also inform understanding of how the jet stream may be changing as the climate warms, and how quickly high-altitude glaciers in the Himalayas (which store water for hundreds of millions of people) may be retreating. These issues are of global significance.”

“We tested the weather stations extensively in Nepal, including practicing to erecting them as quickly and efficiently as possible, at altitude, and with a team of six people.

"We knew that the lack of oxygen and the effects of exhaustion would give us a maximum of two to three hours to get the station up and working before we had to descend.”

As well as installing the weather stations, members of the expedition team conducted research in five areas of science that are critical to understanding environmental changes and their impacts. The five areas were: biology, glaciology, meteorology, geology, and mapping.

During the expedition the team also:

Jonathan Baillie, executive vice president and chief scientist at the National Geographic Society, said: ”Climate change is one of the biggest challenges facing humanity and there is still much to learn about how it’s already altered the world, from the deepest parts of the ocean to its tallest mountains.

“By harnessing our 131-year history of exploration and venturing into some of the most extreme environments on the planet, we will fill critical data gaps on the world’s life support systems and drive solutions to assure that they can continue to fuel our future.”

More in-depth information about the initial scientific findings and their significance is here.