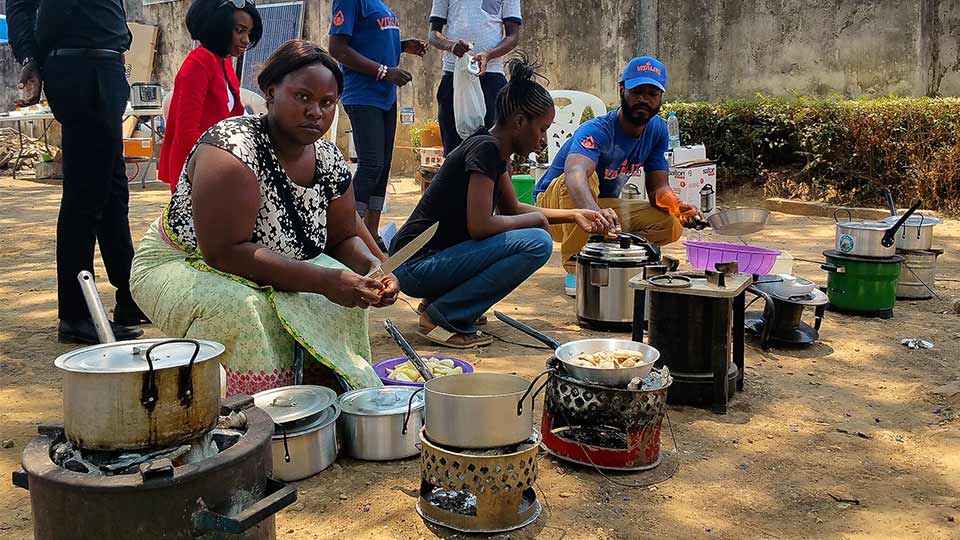 Loughborough University academics are leading a Department for International Development-funded research programme that aims to transform the way people cook in low income countries by focusing on the use of electricity and other modern fuels.

According to the World Health Organisation, household air pollution from inefficient cooking practices is responsible for almost 4 million deaths a year – mainly of women and young children – yet around three billion people in low income countries continue to cook with traditional fuels such as wood and charcoal.

Professor Ed Brown, of the School of Social Sciences, will oversee a five-year programme of work which has the potential to prevent deaths, reduce climate change and enhance people’s quality of life.  Dr Richard Blanchard, of CREST, is a co-investigator on the technical side of the programme.

The programme is led by Loughborough and the University who will oversee a partnership of other UK universities and innovators together with the World Bank multi-donor trust fund ESMAP.

For the last 25 years, a large part of international development funding has been dedicated to changing the way people cook.   However previous investment has focused largely on increasing the efficiency of biomass use in domestic stoves and introducing chimneys that take smoke away from the cooking area.

The technologies developed in response to this approach have not achieved the hoped for adoption levels.  They also barely mitigate biomass cooking’s contribution to climate change, deforestation and losses of economic opportunity.

The ‘Modern Energy Cooking Services’ (MECS) research programme draws on ground-breaking research and innovation being conducted by Professor Brown and members of the LCEDN (Low Carbon For Development Network) team at Loughborough University - including Dr Jon Clokeand Dr Long Seng To  - and builds on work led by Visiting Fellow in Energy and International Development Dr Simon Batchelor, Director of Gamos.

The five-year project aims to break out of the ‘business-as-usual’ cycle by investigating how to rapidly accelerate a transition from polluting biomass to ‘clean’ cooking using electricity and other ‘modern’ fuels.  It will work with a range of communities in countries across Africa and South Asia.

When asked why electricity is at the heart of the project, Professor Brown said: “For the last three to four years, we’ve been asking ‘is it possible to encourage communities in Africa and Asia to cook with electricity?’

“People presume that electric cooking is too expensive or demanding in terms of its energy requirements.

“However, with the price of biomass going up and the cost of solar and batteries coming down, we have identified that there are new opportunities that are economically viable for communities that are already paying for their cooking fuel.”

The MECS programme will look at what is currently stopping people cooking with electricity and gas, and academics will design new technologies and business approaches that will make them more accessible to poor communities.

Professor Brown says the project will also focus on how people cook and the social and cultural factors that will ultimately affect whether or not they will adopt the new possibilities.

Another key feature of the project is that it makes an important connection between two of the major energy challenges facing the international community: reducing the use of biomass for cooking and providing access to electricity - which up until now have been treated quite separately.

For instance, mini-grids – isolated small-scale distribution networks that supply a small amount of electricity to a localised group of customers – are increasingly being seen as the solution to providing electricity to off-grid communities in low income countries.

However, despite a lot of international interest, mini-grid developers face many challenges in making their business models sustainable. Chief amongst these is the low levels of supply purchased by the majority of their customers.

If customers that currently pay for biomass fuels embraced electric cooking, it will result in a move from purchasing polluting fuels to increased electricity consumption, which would benefit the bottom-line of the mini-grid company.

The programme also incorporates running a series of competitions that will encourage designers and entrepreneurs to apply for funding to develop new ideas for elements such as: energy storage for modern energy cooking services, grid and infrastructure adaptability; alternative fuels; and questions of business models, gender, accessibility and inclusion in MECS.

Professor Brown commented: “We are delighted to receive funding from DFID and we are looking forward immensely to working with them and our partners in ensuring that MECS will spark a much-needed revolution in the clean cooking sector.

“We believe that we have a massive opportunity to significantly enhance the UK contribution to Sustainable Development Goal Seven, which is all about energy, and more importantly improve the lives of people across the globe through this programme.”