A professor of 17th century literature is lobbying for a statue of playwright Aphra Behn to erected in the city where she was born.

Professor Elaine Hobby, of Loughborough University, has joined with the campaign group A Is for Aphra, the Canterbury Commemoration Society and Culture Secretary Nadine Dorries to fight for a bronze figure to be placed in the City of Canterbury, in Kent.

Four artists have been shortlisted from 47 bids and are in the process of creating a 50cm bronze maquette of their design. The public will then be able to vote for their favourite this summer with the winning statue expected to be unveiled by summer 2023.

Victoria is a sculptor based on the Kent-Sussex border. Her statue of Rudyard Kipling stands in Burwash High Street. Victoria’s design, called ‘Astrea’ hopes to show Behn’s many personas and her strength of character and resilience. Victoria says, ‘As a woman, I’m aware of some of the prejudices and obstacles Aphra had to face and can only marvel at the way she used what means she had to survive and flourish in a man’s world.  For too many women life hasn’t changed so very much in 350 years.’ See www.victoriaatkinson.co.uk

Meredith is an American sculptor and poet. In 2020 her Women’s Rights Pioneers Monument was unveiled in Central Park, New York. Meredith’s proposal for the Aphra Behn statue is called ‘The Untamed Heart’. Meredith says, ‘My sculpture will portray her as a vital, sexy woman, proud of her brilliant and skilful creativity. The sculpture will emphasize her defiance of social norms and her significant participation in the culture of her day’. See www.meredithbergmann.com

Maurice is a past President of the Royal British Society of Sculptors. He has previously given interviews about how his art has helped him find meaning and the importance of leaving both literal and metaphorical marks; Maurice was born in Amsterdam in 1939 and a Holocaust survivor, having been sent with his family to the Bergen-Belsen concentration camp as a child. Maurice’s design is called ‘Mind Over Matter.’ Maurice says, ‘I believe this presents a rare opportunity to honour a woman for her achievements, rather than her appearance (as is sadly all too common), and in a contemporary manner which challenges viewers to find out more about who she was and her considerable body of work. This is a chance to create a timeless icon for Canterbury.’ See www.mauriceblik.com

Christine is a fellow of the Royal Society of Arts. She has recently produced a sculpture of the suffragette, Emily Wilding Davison for the centre of Epsom and a life-size sculpture of Greta Thurnberg for Winchester University. Christine’s design is called, ‘Aphra: Playwright, Poet, Pioneer.’ Christine says, ‘We should absolutely still be putting up statues of important historical figures, but we should be doing so with sensitivity and with due consideration for the impact our subjects have, or had, on all sectors of society, and we must engage with the public in understanding the context in which our subjects are celebrated. In the case of Aphra Behn, this involves not just drawing attention to her immediate achievements, but also her contribution to feminist, abolitionist, and other societal debates.’ See www.christinecharlesworth.co.uk

The designs include a woman sitting on top of a pile of books and a woman lifting her skirt to reveal words hidden underneath, to reflect the difficulty women writers faced in the 1600s.

Prof Hobby, who is currently leading another project based on Behn’s life, was part of the panel that shortlisted the four finalists.

She said: “I am really excited that the campaign to have a statue of Aphra Behn erected in Canterbury has reached this crucial stage.

“I’m completely delighted that so many world-class artists submitted their pitches to make the statue.

“The creators of the four best are now making small versions of their concept for us to see in 3D.

“Once the models are complete in June this year, I will be touring to Behn-related places to show them off to the public and drawing on my AHRC-funded research into Aphra Behn to contribute to the educational materials that we will display as we go.” 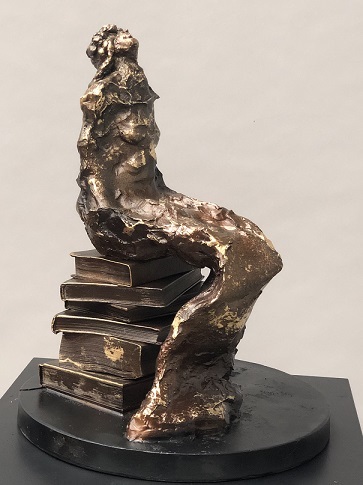 One of the final four… Mind over Matter by Maurice Bilk

Charlotte Cornell, a local writer, poet and PhD student at the University of Kent, who is leading the statue project, said: “Aphra deserves recognition, not just because she was the first professional woman writer, but because she was an excellent writer.

“Aphra rivals Dryden, Etherege and Sheridan for wit in her brilliant plays and for the sheer amount of work she produced.

“Regarding the statue, this shouldn’t be seen as a feminist occupation of a public space; instead, it is a correction of a terrible injustice: women across centuries have well-deserved places being commemorated in the public sphere, yet for too long (unless they were Royal) it has denied them.

“The Aphra network is part of a UK-wide movement called Visible Women. We are putting statues up across the country to those women neglected by a history that has mainly been recorded by men.

“If you achieve something fantastic, you should be celebrated: hopefully nowadays we are excited about commemorating our daughters just as much as our sons.”

Aphra Behn was born in 1640 and grew up in Canterbury before moving to London where she made her name as a playwright, poet and spy for Charles II. She was the most prolific playwright of her era and also wrote a short novel Oroonoko, which exposed the horrors of slavery to an English public. During the later 18th and 19th centuries Aphra Behn’s writings were considered too sexual and bawdy to be performed; reading Behn was also considered indecent and so her writings fell out of popularity. Behn is buried in Westminster Abbey. For more about Aphra Behn, visit www.aisforaphra.org