Scientists have discovered how to predict the movements of microorganisms such as motile algae like Chlamydomonas and bacteria like E. coli as they navigate their natural environments.

There is an estimated one trillion species of microbes on Earth, including varieties of bacteria, viruses, algae and fungi.

They are abundant and appear everywhere in the world, performing jobs such as helping farmers’ crops grow, allowing the production of beer, cheese and other foods, and keeping our bodies healthy.

However, the way they move often appears erratic and random, with no obvious reason for their motions.

Now, researchers from Loughborough University, and Heinrich Heine University Düsseldorf, the Max Planck Institute for Dynamics and Self-Organization, and the University of Bayreuth, all in Germany, and the University of California, Merced, in the USA, have found a way to predict the most likely paths that these tiny single cells take as they move around in their microscopic habitats.

A new paper, published in the journal, Proc. Natl Acad. Sci. USA, reveals how the team observed and tracked the motions of a single Chlamydomonas cell, which was trapped in a sealed, water-filled chamber.

Using experiments and analytical and numerical calculations they studied the motion of the cell to determine how the microorganism would behave when exploring its surroundings.

The result was a set of computer simulated predictions which gave them flow maps of the most likely paths the cell would follow within the chamber.

These theoretical predictions were confirmed by experiments with living Chlamydomonas cells performed by the group of Oliver Bäumchen in Germany. 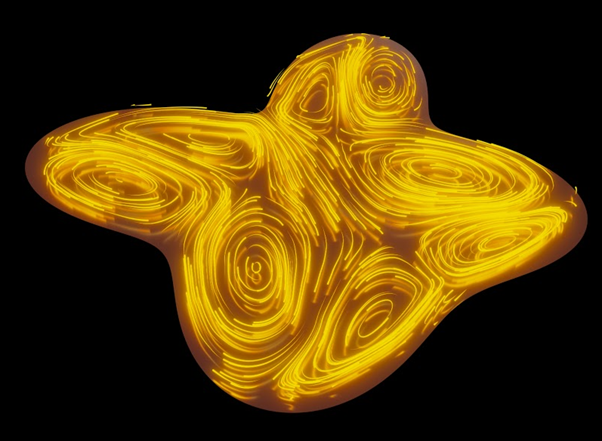 Artist's impression of a microorganism swimming in a complex environment. Visualising the fluxes of probability reveals the most likely path of the microbe. Credit: Esinam S. A. Dake, Jan Cammann, Marco G. Mazza

Principal investigator Dr Marco Mazza said: “Microorganisms are in a constant state of motion. Either buffeted by the fluid they live in, or because they have appendages used for motion.

“When looking closely under the microscope, these motile particles move in a seemingly erratic, random manner when there are no obvious biases in their motion, such as a source of food.
“These motile cells commonly live in soil where they experience a multitude of solid boundaries of complex shape.
“What can we learn about the strategies of the motile cells' motion in these complex environments?
“Combining geometry and active matter physics, we find from experiments and theory that the geometry of confining interfaces shapes the topology of the most likely, average trajectory”, said lead author Jan Cammann.

“We discover a 'flow' of the most likely trajectory that follows the change in curvature of the confining boundaries and even influences regions within the bulk.
“These findings might lead to devices that actively shape a microbe's average direction of movement, which could be of use to create confining channels with shape (and curvature) that can guide the motion of these cells.

“Such devices could be used to power microscopic machines or control the motion of cells within bioreactors.”