The Public Art Global Competition for the International arrivals corridor was announced in early 2019, with The Beijing New Airport Construction Headquarters (BNACH) and the China Central Academy of Fine Art (CAFA) as judges. The School of Design & Creative Arts Loughborough University were one of 250 internationally renowned teams selected to submit designs, and one of ten to receive a nomination prize.

Dr Christopher J. Parker, Lecturer in UX Design, instigated the collaboration. Having worked with CAFA as an Expert Advisor for the Yantai Urban Planning Bureau, they invited him to submit a vision for Daxing International Airport. His design on Daxing Airport’s concept experience won Loughborough University a place in the international submission process. Dr Parker was responsible for the project’s human elements, considering the transition of people and experiences as an interconnected formation of memory.

Professor John Atkin, Director on Internationalisation: Creative Arts, joined the team as creative and artistic lead. Professor Atkin is an Honorary Fellow of Beijing’s National Academy of Sculpture, an Expert Juror at Tsinghua University Beijing, and sculptor of Beijing’s Olympic Park’s landmark sculpture: Strange Meeting. Professor Atkin was responsible for the visual, artistic, and creative vision; realising the team’s ambitions through the corridor as an artistic space.

Professor Ian Campbell, Associate Dean, completed the team bringing his extensive experience in international projects to the company. Professor Campbell was responsible for the project’s practicality, feasibility, and desirability. 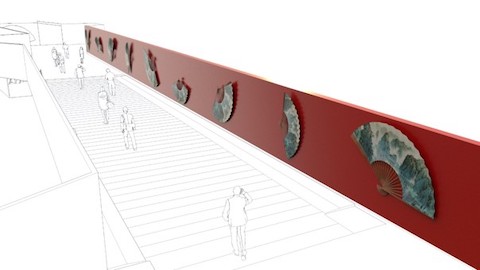 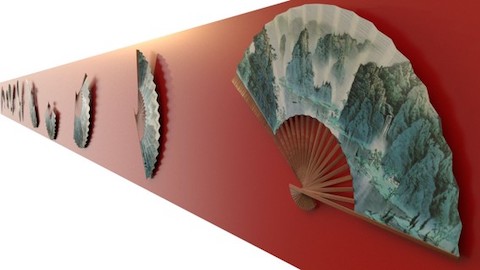 The work was titled: Fan & Kite, with the walls of the international transit space designed to become a 21st century art gallery. To create a modern art gallery fitting Beijing’s international status, the work was based on three tenets of Chinese history: the fan, the kite, and the calligraphic-landscape painting. Together, these elements create a flowing design that transports visitors through the transit area.

Movement was pivotal to the art piece, placing the fans on each wall to mimick a kite's undulating movement. Travellers entering the corridor would notice this playful sense of forward motion; buoying them along in a celebratory movement. Lighting, carefully used behind the fans, emphasises this forward movement and sense of play.

A multi-sensory element was vital to the design. Chinese Erhu music greets travellers as they enter the corridor to evoke sensations of China’s cultural past. Oriental scents further stir the traveller’s emotional images, with sandalwood, mandarin, vanilla, and amber greeting each person on their arrival. They sought to evoke surprising concepts of China that exceed expectations of the nation; even before the traveller reaches immigration.

Kinetics created a release of tension and farewell to passengers. The final, and largest, fan situated above the exit escalators opens and closes as passengers make their way downstairs. The fan’s undulating movement mimics a fan’s gentle breeze, adding a harmonising atmosphere after being sat motionless on an airplane.

Chinese influences were central to the design’s success. Visitors had to feel a genuine experience of China through the artwork; even if they were transitioning through Daxing airport to another destination. The team looked at the Chinese Artist Xueshi Bai, born in Beijing during the early 20th century. Bai is famous for his water ink landscape paintings, a design of which they changed to fit the bilateral fan bones of a Chinese fan.

The Chinese Kite was also a significant influence; an object of rich symbolic meaning in China since 475 B.C. By mimicking the kite’s movement through the fan’s undulating buoyancy, they wanted to create interest and intrigue for Daxing’s International visitors.