Productivity growth means getting more output from fewer inputs. It is a key goal of conventional economic policy. But ‘productivity growth’ is a vague concept and there are large gaps in our understanding of it.

This ESRC funded project explores links between the different types of productivity and two major gaps: the relationship between energy and productivity, and wellbeing and productivity. The aim is to map the existing evidence base and guide future ESRC productivity research. 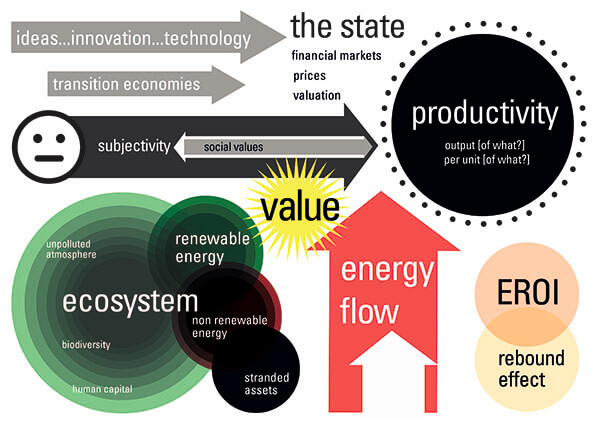 Energy is closely related to the key elements conventionally thought to impact productivity (such as technology), but could also be linked in less obvious ways. For example, changes in the structure of the economy (as we shift from manufacturing to services), gender and income inequalities, and the physical quality of energy itself may all play a role in mediating the energy-productivity relation. Properly understanding all these factors is essential, partly because we expect big changes in the energy base of the economy as we move to low-carbon energy sources.

Mapping the evidence base

This project used a combination of conventional literature reviewing and participatory systems mapping techniques to map the evidence base on the links between energy and productivity, and productivity and wellbeing.

Workshops brought together experts from policy and academic communities. At these workshops, participants used systems oriented design techniques to visualise key relationships and tensions in our understanding of productivity. The outputs from the workshop were used to guide literature reviews and innovative visualisations.