Public understanding of everyday life - and the role of the media - under communism in Eastern Europe tends to be dominated by stereotypes formed during the Cold War.

Our research challenges these stereotypes, proposes a more nuanced understanding, and acknowledges the diversity of communist societies. Its reach has extended beyond academic circles via museum exhibitions in the UK, USA and Eastern Europe as well as a BBC television documentary.

The Cold War coincided with the rise of television, but the medium’s trajectory in countries under communist rule remains poorly understood. The Screening Socialism project offers the first transnational, comparative investigation of television in state socialist Eastern Europe.

Our research in this area stretches back 15 years, to 2006, and comprises a significant body of work – central to which has been the effort to challenge Cold War stereotypes.

Notable studies include research on the print media in Yugoslavia, and the Screening Socialism project which examined television histories in five countries.

This project found that explicit propagandistic content was rare, and that programming had much in common with Western broadcasting whilst audience tastes were often at odds with official ideologies. It also revealed notable cross-country differences, with some countries more open to Western programming and more tolerant of dissent.

Another strand of research explored everyday life in the Soviet Union to understand how changes, following Stalin’s death, were experienced by ordinary people. An examination of the mass move to prefabricated housing in the 1960s shattered many stereotypes. Homemakers were not passive subjects and appropriated state-produced consumer goods in ways that transformed standard apartments into individualized homes .

Overall, this research challenges the stereotype of the communist East versus the liberal West and highlights the diversity of communist societies. We can no longer view communist countries as backward and pervaded by propaganda – they had much in common with the West.

The exhibitions - drawing on our expertise - attracted ≈190,000 museum visitors across five countries 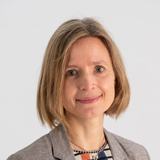 Professor of Media and
Cultural Analysis