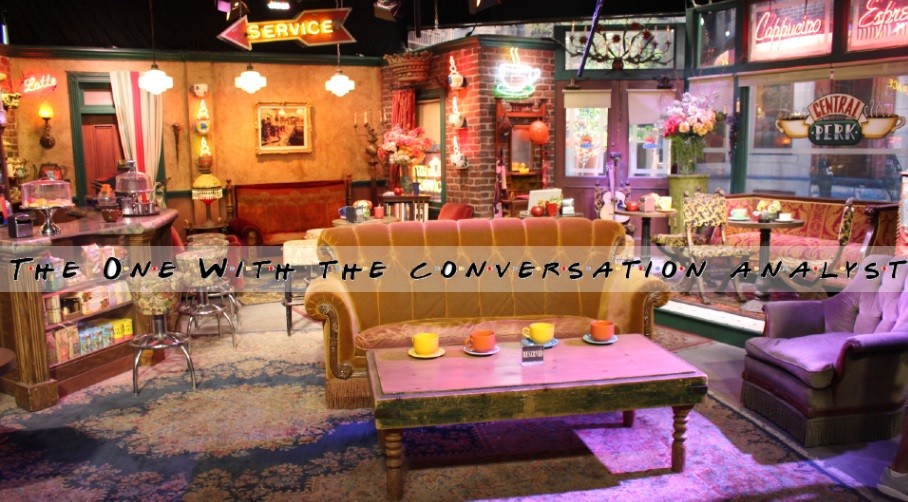 ‘The One with the Conversation Analyst': What Friends and Phoebe Buffay teach us about the way we talk 25 February 2021

Liz discussed what Friends can teach us about talk and more on the ‘Cuppa with a Scientist’ podcast.

On her long list of study subjects, you will find a group of people you wouldn’t have expected Liz to pay particular attention to – the cast of the popular 90s US sit-com, Friends.

The School of Social Sciences and Humanities Professor features clips from the show in her book Talk: The Science of Conversation, based on her earlier research, and has used Friends clips to introduce students to conversation analysis.

“Friends dialogue, like other sitcoms, is really great for showing the basic workings of interactions”, Liz explains.

“In the very first episode, two of the characters invite another to come over to help them put together some furniture, and the person being invited, Rachel, says, ‘Oh I’d really like to but I’m going to just stay here, I’m really tired’.

“What's interesting is there's no audience laughter at this point. But then they invite another character, Phoebe, she says, ‘Oh I wish I could, but I don't want to’ - and then the audience laughs.

“There are lots of things like this where the normative structure of interaction is breached by the scriptwriters.”

Liz continues: “I was also interested in how the laughter tracks were used as evidence of what the audience should be finding funny.

“Friends is full of these sorts of plays on the structure of interaction. It's not that it's full of set-piece jokes and one-liners - a lot of the humour is built off breaking what you might expect to happen at any given moment.

“Phoebe’s character is partly built on breaking the norms of interaction. There's another great scene where one of the characters says, ‘Hey Pheebs, you know what I’m thinking?’ and she says, ‘Oh! Okay!!’ and starts to guess what Monica is thinking, where what’s expected is just “what?”, giving the ‘go ahead’ to continue to Monica.

“Friends shows people that they really do understand that talk has a structure to it.”

Liz discussed what Friends can teach us about talk on the ‘Cuppa with a Scientist’ podcast - a brand new podcast launched by the Loughborough University PR team that aims to inspire the next generation of scientists and dispel the myth that all scientists wear white lab coats.

The episode, which is the second in the series, also sees Liz describe her academic journey, past and present research projects, and social science’s place in a tech and AI-dominated world.

You can watch the episode by clicking the below YouTube video:

Or if you prefer to listen to your podcasts, you can do so below:

For more information on the ‘Cuppa with a Scientist’ podcast series, click here.