Graeme Mitcheson is a sculptor based in Leicestershire. Since graduating from Loughborough College of Art in 1995, he has been designing and creating large-scale public art, sculptures, and memorials of national significance.

Here Graeme shares an insight into some of his work.

“Most of my work is in carved stone, learned during my time at Loughborough College of Art.

Originally from the northeast, I have remained in Leicestershire since graduating and have a number of pieces sited locally. These include the sculptural mooring posts in Loughborough Canal Basin, the granite WW1 memorial at Coalville Clock Tower, as well as a series of Mountsorrel granite sculptures sited in Quorn.

I have created a number of memorials at the National Memorial Arboretum, including the Naval Service Memorial, which was shortlisted for the Marsh Award for public art in 2017.

It is created using 13 panels of coloured glass, inspired by the different colours of the oceans. The coloured blue shadows are projected onto a white granite terrace and at certain times of the day the negative shapes create the outline of a battleship. A Kilkenny limestone sailor, with no rank and no gender, watches over the blue terrace. 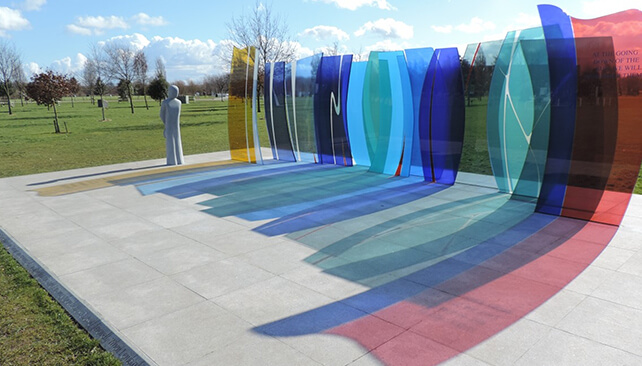 Other pieces at the National Memorial Arboretum include the Bevin Boys Memorial and the Guinea Pig Club Memorial, which was dedicated by HRH The Duke of Edinburgh in one of his final public engagements.

In Burrough on the Hill in Leicestershire is a memorial to the 10th Battalion The Parachute Regiment. The memorial commemorates those in the regiment who were stationed in rural Leicestershire before embarking on the disastrous mission, Operation Market Garden in WW2. 582 members of the Regiment departed Leicestershire and parachuted into Arnhem in 1944, only a few returned.

"The best of times during the worst of times". A memorial to the 10th Battalion the Parachute Regiment. Burrough on the Hill, Leicestershire. 2019. 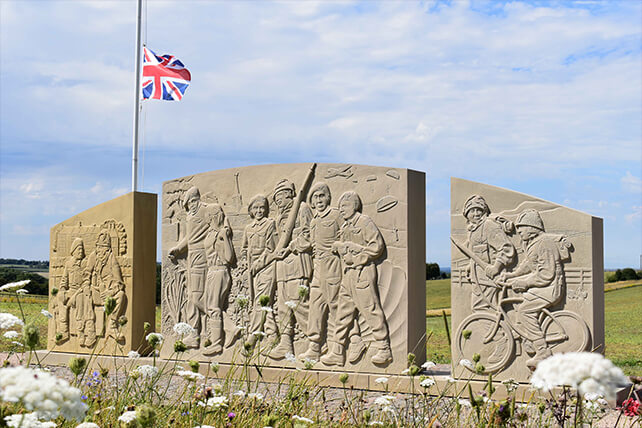 "The best of times during the worst of times", Leicestershire, 2019

Some of my other projects have included the Sir Bobby Robson Memorial in Newcastle – a timeline of the career of the former England manager, Mytilus Edilus – a Kilkenny limestone sculpture inspired by the mussel fishing industry on Conwy Quayside, Wales, and many other large-scale public sculptures across the UK.”