He joined French Paralympian Théo Curin and five-time world swimming champion Malia Metella as they made history by becoming the first people to swim the longest crossing of Lake Titicaca, covering a distance of around 120 kilometres (74.5 miles) between Bolivia and Peru.

The trio dragged along a raft in which they slept and ate during the 11 days it took to cross the lake. This was the trip planned by Curin’s charity, which seeks to raise awareness for people with disabilities and the environment.

During the journey, the swimmers kept their environmentalist message in mind. They only drank filtered water from the lake and ate from reusable bags to avoid producing any plastic waste.

While Mathieu had previously completed a 14.4 km crossing of the Strait of Gibraltar, this was a far greater feat. The challengers faced many difficulties including storms, fierce winds, and the strong currents of Lake Titicaca. However, with a years’ worth of training using hyperbaric chambers that simulated the cold and treacherous conditions, as well as a journey through the Pyrenees, the trio powered through to complete their challenge.

Prior to his Lake Titicaca challenge, he also completed several other eco-adventure challenges including cycling 18,000 km around the world and swimming 380km down the River Seine to mimic the journey of a used cigarette butt. 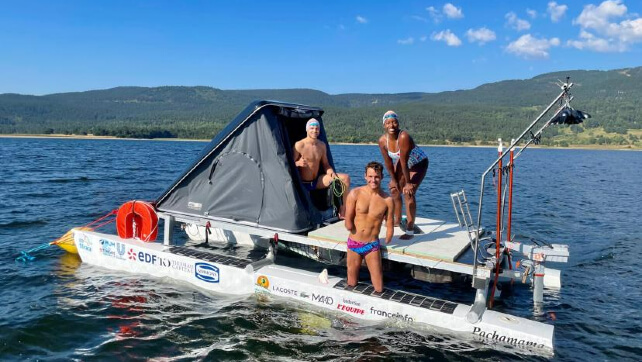