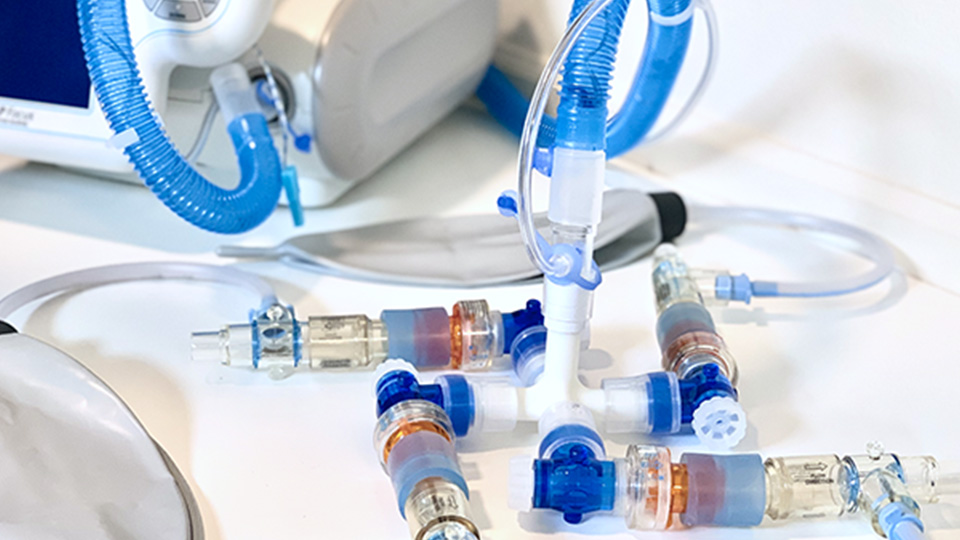 Prana is a medical device that allows four patients to share one ventilator safely when resource constrained hospitals are overwhelmed with patients.

Prana has huge potential for use in pandemics, natural or manmade disasters, and resource-constrained regions. The non-invasive ventilator ‘splitter’ supports hospitals in crises by equipping them with the capacity to serve overwhelming patient loads without compromising safety, quality, or user experience, making access to healthcare resources affordable for those who need it most. Splitting these non-invasive ventilators at the preventative stage also means it is possible to prevent patients needing critical care and additional hospital resources. Ultimately, lives can be saved.

The device was the idea of Product Design Engineering graduates Abhi Ghavalkar and Zach Mudge who developed their product after a series of interviews with doctors and respiratory therapists in Ghana, Cambodia, and Mexico, where ventilators are a scarce commodity. A prototype was initially developed using plumbing pipes and valves, balloons, and a vacuum cleaner to provide an air supply as the pair sought support for their idea.

After a series of setbacks in the UK, the pair submitted a proposal to the United States Food and Drug Administration who replied positively asking the team to carry out additional testing using medical-grade parts in a clinical setting.

The team received a grant from University of California, Berkeley’s Jacobs Institute for Design Innovation which gave them access to a network of experts from the American Association for Respiratory Care, International Council for Respiratory Care, UCSF Health, and Stanford Children’s Health who are mentoring the team through the design and development process. Under the guidance of their advisors, the team has created a functional prototype and testing is underway in a clinical setting at the University of California, San Francisco.

Since the inception of the project, the team – which includes fiver former Loughborough students - has grown from two members to twelve who are based in the UK, California, and Mexico. Zach and Abhi also launched the project as a dissertation topic for an MSc Design Engineering student at Loughborough’s Wolfson School to provide the opportunity to work on a real-world project.

Prana, formerly called Limb-O2, was named a World Changing Idea by Fast Company, won the Social Impact prize at San Francisco Design Week Awards, and was named a notable project in the Health & Wellness category in the Core77 Design Awards. The team was recently accepted into University of California’s CITRIS Foundry incubator.

Find out more about the Prana ventilator splitter online.