I haven’t come from the traditional background an engineering PhD student would typically come from. In the immediate years before starting my PhD I was a supervisor at a clothes shop, but, before that, I completed an undergraduate degree at Anglia Ruskin University in Cambridge, in Sociology and was lucky enough to subsequently do a master’s degree in Urban Sociology at the University of Amsterdam.

Sociology and systems engineering on the surface make an odd couple, yet there are numerous ways in which they are linked. The major one is that systems are interconnected nodes of separate elements which, when combined, produce a new entity. The same can be said of society, for we are all individuals who have individual traits and opinions, but we have no choice but to live amongst others with whom we interact and with some will formulate friendships and partnerships.

Initially I was seeking out sociological PhD positions, but these are hard to come by. So, when I saw the systems engineering position at Loughborough it caught my eye because whilst it wasn’t sociology, it was still within my area of expertise. I contacted the person behind the project (Dr Melanie King, who is now my supervisor) and explained my position. The response I received was at once encouraging whilst informative, putting any anxieties about whether I would be able to work on this project to bed. This positive response made up my mind, so I applied and six months later I had moved cross country and began my research.

Although a happy accident, I am so thankful to have chosen a systems engineering project, as I feel that I am on the edge of so many different subjects and, as a result I can be a transdisciplinary researcher and, eventually, have a positive impact wherever I go.

Ultimately, my PhD project is about researching the role of co-design in the development of smart city services. A smart city is essentially one where technology and data are used to inform decision making in the pursuit of increased sustainability, efficiency or competitiveness. Yet, this is a topic which is large enough to encompass an entire academic career, so as with all things PhD, you start big and refine, narrow and define your area of research until you end up with something unique; something which you can add to the knowledge and literature of your chosen field. Through this process, I have stumbled upon the realm of ‘urban resilience’ - or, how to make cities more resilient in the face of external shocks and internal stressors - and have shaped my smart city project around this as a theme.

For a city to be resilient, putting in flood barriers or implementing building design codes is important, but is not enough, because ultimately a city is only as resilient as those who call it home. A frustrating reality facing many academics is the question of how can they get their research and expert insights out into the public realm? For, if their findings and data were public knowledge, there is a chance that the public could in turn, become more aware of the potential risks facing them and prepare in advance for when they arrive. In short, they could become more resilient. Therefore, it is the goal of my project to take this expert insight and data and build a system where the information produced by sensors and research can be directed into the communities which can benefit from them.

From a systems perspective, the output of a sensory system – let’s say an earthquake monitoring sensor - is data, which is interpreted via the knowledge of the academics using the sensor. The boundary of this type of system is therefore the production of insight, which is subsequently published in academic journals, official reports and sometimes, on publicly available platforms. For instance, say there is an earthquake monitoring site which records seismic activity in a built-up area and it identifies that there is a high chance of an earthquake within its vicinity. Those running the site may go ahead and tell the local government about the potential for an earthquake, who in turn, may warn the citizenry. Yet, many citizens may not trust or particularly like the local government, whilst others may be unaware that the information exists in the first place. This is a serious problem if community resilience is of concern.

Throughout my research it is apparent that many projects which produce socially relevant insight do not consider what happens to the data after it is published. It is released into what amounts to be an informational ocean, and invariably, gets lost or drowned out. Therefore, in my opinion as a systems engineering student, the boundary of the current research system needs to be expanded. It is no use to produce publicly relevant insight and have it go to waste. What is needed is research into how you can expand the boundary of an engineered system - like a seismic activity monitoring station - and combine it with the social networks which make up a community, to ensure that the ‘good information’ produced by academics can find its way to the heart of the community.

So, in short, my project is attempting to answer the question of how can data and expert insight be best utilised in the pursuit of increased urban resilience.

Although Covid-19 has skewed my expected experience of being a doctoral student (gone are the inter-scholar interactions - which I was especially looking forward to - as are the doctoral student social events), I have been in the privileged position of being able to continue my research from home, carrying out this work has provided me with a level of stability which cannot be improved upon. 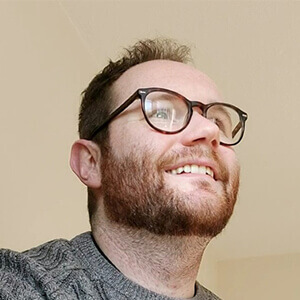 Quite frankly I love studying and reading up on topics which I find fascinating, so being able to do that, with the brilliant support I have from my two supervisors - the aforementioned Melanie King as well as Mey Goh - has meant so much. This support was especially apparent after the first two months of my project where I was encouraged to write an academic paper on my research, which was published in February 2020 - a shade over five months since I started.

To be a published academic so early on in my career is something which I am particularly proud of and, I don’t think, could have happened in another set of circumstances at another institution. So, despite doing little at the University itself, the support I have received, and is available if needed, has been a real blessing.

My typical day starts with me getting up at around 7:00am and I take my girlfriend into work at around 8:15am. I do this because I’m a lovely boyfriend… and because it makes me get up in the mornings and do work. When I get home at 8:45am (where I have been working during the pandemic), I make a coffee and subsequently read my emails; answering any if required. Then at 9:00ish I start my work for the day. Many researchers will have a strict regime to follow, but I am more iterative and have a rough idea from the day before what I should be doing. This could be reading journal articles, it could also be making diagrams, preparing for interviews, admin tasks, online courses, making presentations, writing essays and articles - the list goes on. I do this until around 1:00pm when I have a break for half an hour or so, then I do the same in the afternoon where I work until I feel like I am done for the day - it could be an hour after lunch, or it could be right up until 5:15pm when I have to leave and pick up my girlfriend. I then cook for the two of us and then spend the rest of the evening doing high minded academic cultural things, like binge watching Netflix!

To be perfectly honest I don’t know where I see myself in five years’ time. All I am focusing on is the next year and a half (when I finish), as we are in a precarious and tumultuous time where any long-term prediction is likely to be skewed to such an extent that it will be rendered obsolete. However, in a broad sense I want to go wherever my research and expertise will have the largest impact, if that's in academia then great, if it's working for the government or a city’s municipality then that's fine too. Either way I want to keep on researching and finding ways to bring expert insight into our communities.

The biggest piece of advice I can give to anyone considering a PhD is, if you are struggling to do work, or it isn’t flowing as well as you’d like, do not force it, otherwise you will make yourself ill! Personally, if I’m having a bad day, I stop working. Invariably the next day is much better because I haven’t fretted over not completing my intended task from the day before. Remember three years is a long time.

That being said, I have found that breaking down my project into week-by-week goals has been incredibly useful. Each week I have a meeting on Microsoft Teams with my supervisors and I present my work from the previous week in the form of a slideshow. This is great for three reasons:

1. You break the big scary project down to size

2. You get great practice in presenting your ideas and can build up confidence in your presentation skills

3. You end up with a lovely record of your work which is easily accessible.

Finally, don’t decide to do a PhD in a subject which isn’t utterly fascinating to you. Love what you do. I do, and it has been a brilliant year and a half; even if Covid has closed all the pubs!