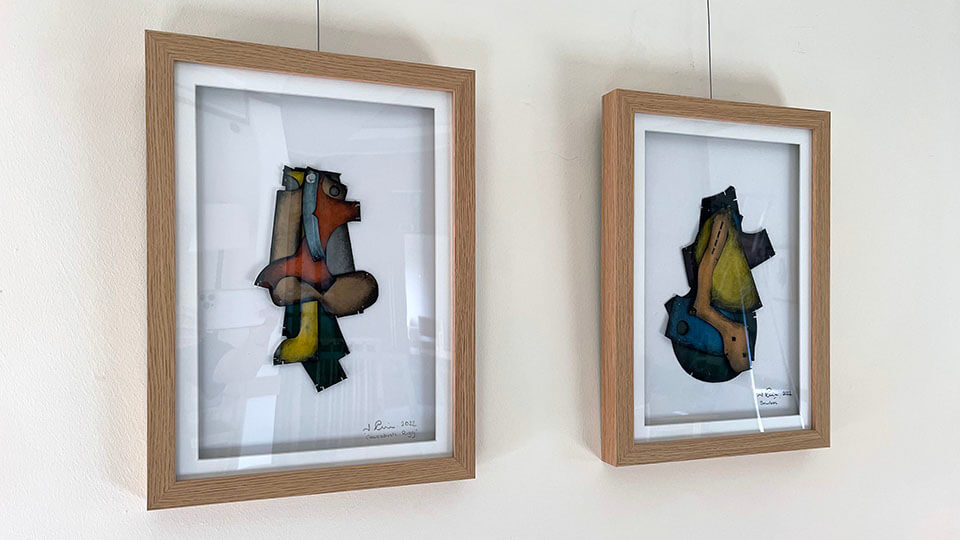 Reader in Fine Art John Atkin's exhibition is entitled 'The Made and The Unmade' and will be available to view until 1 May 2022 as part of the Cambridge Festival.

The Made and the Unmade is born out of an earlier series of wall-based artworks entitled The Pendulum Reliefs, which have been exhibited throughout North America.

These artworks have developed from John Atkin’s interest in pattern-blocks (tailors’ patterns), which at one and the same time are elegant abstract forms as well as found-objects that allude to human identity. The human figure is at its core to, as is the objet-trouvé tradition in Modern and Contemporary Fine Art practice.

The overwhelming majority of this work is hand-wrought, using traditional skills such as découpage, drawing, and painting which have led to the juxtaposition of digital methods as seen in this exhibition.

Also on display are a series of drawings, sketchbook pages, and ceramic sculptures, derived from Atkin’s research into C14th plumb bobs. These measuring instruments have been used ever since ancient Egypt and pinpoint the nadir; the downward-facing point of a specific location as dictated by gravity. This description is almost human, and Atkin’s interest in this historic variety of plumb bobs is their figurative references, as well as his interest in found objects and their resonance to the human figure.