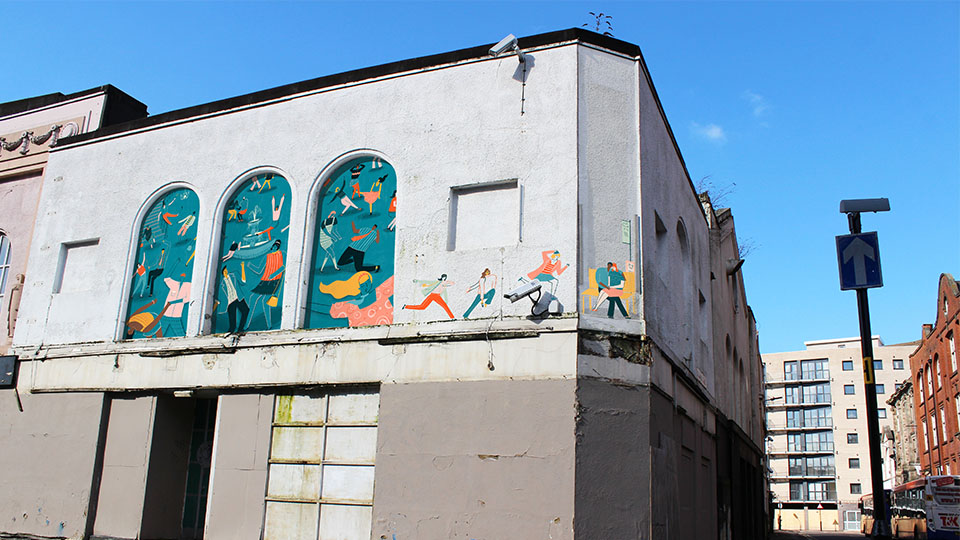 The Palais De Danse is the old dancehall where the 'lunchtime dances' would draw in crowds on a Friday. The illustration (which would form part of the trail) portrays women running back to work and a couple by a bus stop wrapping around the walls of the building.

Lauren Jefferis is a final-year Graphic Communications and Illustration student within the School of Design and Creative Arts at Loughborough University, and uses illustration as a powerful tool to celebrate the stories of everyday people from 1960's Leicester.

For this year’s Arts Degree Show, many students are exhibiting their final-year work online as part of a digital showcase using carefully curated images, text and video.

For her dissertation project, Lauren created ‘Flashback – Celebrating life in 1960’s Leicester’ – a series of illustrative and storytelling artwork celebrating the history of St George’s Cultural Quarter in the city centre of Leicester.

The purpose of the project was to offer a visual trail around the Quarter that the community could participate in to gain knowledge of the people and events that once took place in the space they now reside in.

By using a trail, this would help the audience to engage with a sense of playful curiosity into investigating what the area has offered to its residents over time, and not just what they know from modern life.

When asked why she chose to focus on this for her dissertation, Lauren said: “I have always been interested in how illustration can be used in the surroundings. I have loved that part of Leicester since I was a child and had known it for the excitement of going to the Curve Theatre, the impressive Art Deco Athena building and the creative feel of the area.”

As part of the process, Lauren conducted some research by listening to archived audio files which consisted of residents reminiscing on the experiences they had in the city.

“Listening to these stories – which aren’t huge, world-changing stories like discovering King Richard III but are the daily, ordinary lives of people – were really interesting and I thought they needed to be shared with the modern generation so they can feel a bit more connected to the area they live and work in now,” said Lauren.

“I then thought I could do this through storytelling, because these stories lent themselves naturally to being illustrations because they were quite comical in places and quite quirky, so that worked really well in my favour.”

From her time spent researching, Lauren also discovered that public art has been shown to benefit local areas, by lowering rates of crime and vandalism and improving the community spirit.

As her concept began to develop, she highlighted key sites and stories that she wanted to tell through her work, such as the lunchtime dances at the Palais De Danse, the Art Deco Odeon cinema, the old bus depot, tales from the factories, and the cultural changes which took place in the city as more immigrants moved to the area. Lauren also experimented with different ways of telling these stories, using narratives, 3d structures, zines, and street art.

When she’s not studying at University, Lauren has been working on her own business, Pickle Illustration.

Set up in 2019 with friend and Loughborough alumna Olivia Collins, the duo provide services to local businesses such as painting murals, designing merchandise and packaging as well as offering both digital and print illustrative work.

They also have an online shop which sells prints, postcards and greetings cards; and the pair were recently awarded Loughborough Enterprise Network’s Rising Star Award for a selection of postcards they launched at the beginning of the COVID-19 pandemic.

Speaking about her plans after graduation, Lauren said: “We [Lauren and Olivia] have plans to keep growing Pickle Illustration; we’re taking on bigger mural projects which may have more of a community interaction element too. We’re also keen to keep working on a variety of projects from packaging to editorial alongside companies we respect and admire.

“During COVID-19 we have been developing our online shop, so this is something we would like to continue to run, selling mostly print designs. Both of us are excited to see what the future holds, and we have big goals for the future, including getting our own Pickle hub where we can continue to grow and offer workshops and much more!”

Furthermore, Lauren worked alongside the University’s Creative and Print Services team last year to produce a unique, nostalgic print for those graduating from Loughborough University as both a keepsake and reminder of the special quirks that make the Loughborough student experience what it is.

A full collection of students’ work for the Arts Digital Showcase – including Lauren’s – can be viewed online.