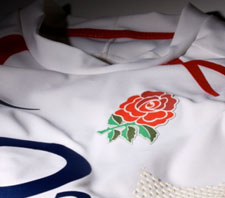 Rugby players require lightweight, comfortable shirts that promote cooling and reduce fluid loss via sweating. However the nature of rugby as a physical contact sport, demands that shirts also be strong and durable. Loughborough researchers worked with international rugby players and the global sports brand Nike to tackle these competing demands and create a high performance rugby shirt.

They then investigated fabrics, garment patterns and the seam types used in clothing. The rig proved pivotal in producing solid scientific data for fabric and design choices at key development stages, and for indicating what parameters had the greatest effect on garment strength.

Nike was then able to use the scientific data gathered to produce a rugby shirt that was twice as strong as previous designs. The cutting-edge clothing was worn by the English and French squads during the 2007 Rugby World Cup. Work is ongoing to refine both the high-performance shirts and the test equipment, to develop an even better shirt in preparation for the 2011 Rugby World Cup. Nike has also asked the team to adapt the test rig with a view to investigating other sports apparel.