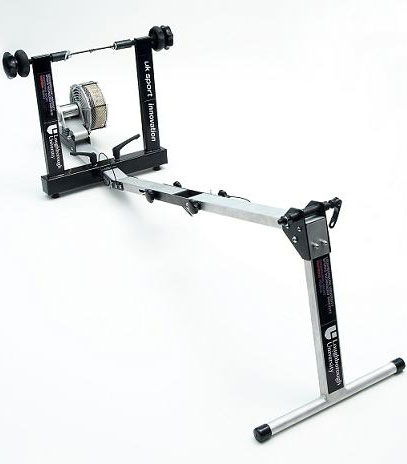 The Institute is one of a select few organisations to gain innovation partner status with UK Sport. Under UK Sport’s innovation programme, the Institute has been commissioned to develop novel sports equipment, apparel and footwear for British Wheelchair Basketball, British Swimming, British Cycling and Winter Sports to help lead these sports to world class success.

One of the initiatives under the innovation programme involves a collaboration between the Institute, British Cycling and the English Institute of Sport. The Sports Technology Institute worked with Olympic Gold medalists Jason Queally and Chris Boardman, who is also British Cycling’s Head of R&D, to develop a new turbo-trainer in just four months.

The bespoke system needed to simulate as closely as possible, the feel of cycling on a road or track as offered by commercially available turbo trainers.

In addition, it also needed to be far more robust in order to withstand the maximal power output of the world’s most powerful cyclists. Portability, but not at the expense of structural integrity, was also an important feature.

The Institute applied its advanced manufacturing expertise to meet this challenge and deliver the first prototype for evaluation by Sir Chris Hoy in February 2010.

SME Sew Systems worked with the Institute to ensure three updated turbo-trainers were delivered in time for the Copenhagen World Indoor Track Championships in March 2010, where Hoy won his tenth track title in the Kierin.

The turbotrainer has been extremely well received by Hoy and the rest of British Cycling’s endurance athletes. The Institute is now on course to deliver more turbo-trainers of multiple variants for the 25 track sprint and endurance squad athletes.