Understanding hydrogen explosion characteristics is important for the future use of hydrogen as a clean fuel.

The aim of the research project is to develop reliable numerical simulation techniques that could be used to understand hydrogen flame propagation and explosion characteristics. Safe use of hydrogen will provide carbon and pollutant free transport and other power generation technologies. 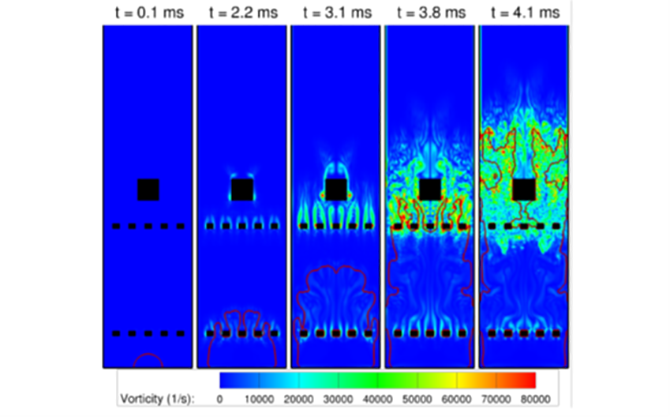 Hydrogen is considered as a promising future energy carrier because of the high energy density on mass basis, and its carbon-free property. Hydrogen can be generated from different sources, including fossil fuels, renewable fuels, or electrolysis of water. Hydrogen can also be utilised in many ways. Hydrogen vehicles using Fuel Cell technologies, direct hydrogen burning in internal combustion engines, burning hydrogen mixtures in gas turbine systems are some examples where hydrogen can make a significant impact to reduce the environmental damage caused by current fossil fuels. Understanding safety concerns of hydrogen are necessary for safe operation of hydrogen usage in the future. In this project the large eddy simulation (LES) technique based advanced computational models are developed to simulate hydrogen explosions and characteristics. Shown in Figure 1 is a LES result of a hydrogen explosion simulation of Sydney University hydrogen explosion experiments.

We will develop advanced simulation techniques to gain new insights into hydrogen flame propagation and explosion characteristics that will provide guidelines for the safe deployment of hydrogen as a green energy source.

"Our simulation group has been in the forefront of developing accurate and validated numerical simulation techniques for combustion and explosion applications."

Supporting Black people in the construction industry: an insight into alumnus Amos Simbo’s company, network, and passion for engineering