Influencing strategies, policies and programmes to increase the representation of BAME coaches in men’s professional football in England

Dr Bradbury has explored racialised inequalities within football coaching for more than a decade, focusing on two related areas that impact BAME coaches.

As part of two European-wide studies – commissioned by Kick It Out and the Football Against Racism in Europe Network – he examined levels of representation and racialised barriers to career progression in men’s professional football. He then moved his focus to all levels of the men’s professional game in England.

The second, more recent, strand of his research has examined the implementation and effectiveness of national programmes to develop and support BAME coaches.

In 2012, he was commissioned to examine the FA COACH Bursary (pilot) programme which was later expanded and rebranded as the FA Coach Inclusion and Diversity programme. This research included a survey of 100 BAME coaches and interviews with 55 BAME coaches and academy staff at professional clubs.

He found examples of operational good practice as well as challenges to programme delivery around accessibility and inclusivity in HLCE courses and club-based placements. However, his findings did highlight the programmes’ educational, experiential and vocational benefits all of which support the career progression of BAME coaches.

In 2020, there were just six BAME head coaches across the English professional leagues 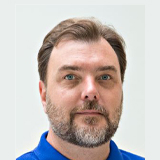 Lecturer in Sport, Equality and Diversity