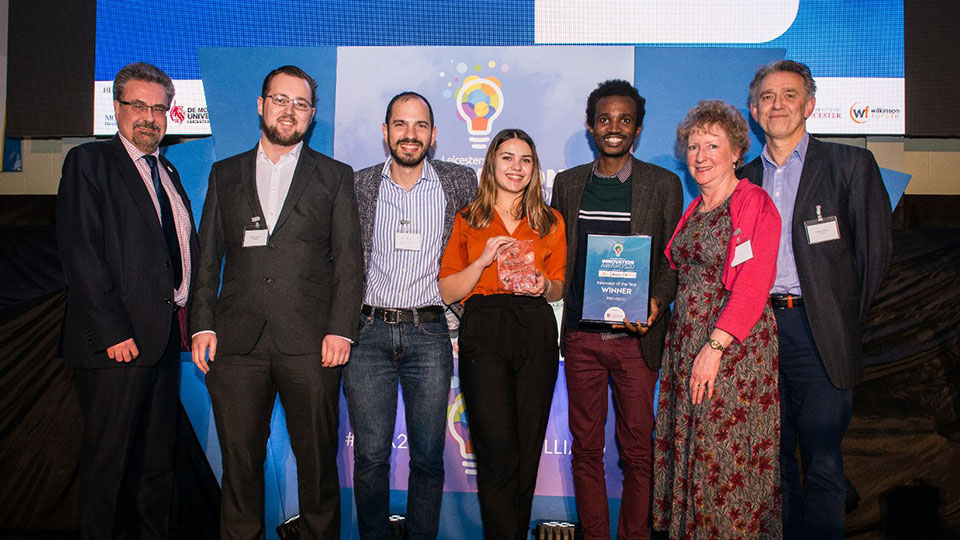 Innovative businesses, founded by the University’s academics and graduates triumphed at the Leicestershire Live Innovation Awards on Friday, winning four of the twelve categories, including the overall champion, Innovator of the Year.

Previsico, a spinout from the University’s Department of Geography and the Environment, received awards for Digital Innovation and Technology Innovation, before concluding the evening by being crowned overall champions.

The judging panel chose Previsico for Innovator of the Year Award because of the important role it has the potential to play in so many people’s lives, adding: “It seemed apt that in the midst of the current levels of unprecedented rain that have affected so many parts of the UK, the award should go to a business set up to help people prepare for flooding.”

Previsico’s Co-Founder and Chief Operating Officer, Dr Avi Baruch, accepted the awards along with the seven members of the spinout, which launched last January in the Incubator on LUSEP, the University’s Science and Enterprise Park.

Fellow Incubator member Kate Walker also received the University Student Innovator of the Year Award for the business she began during her final year studying Product Design Engineering. The ExpHand is a life-changing 3D printed prosthetic arm that can be adjusted to fit any child between the ages of 3 and 10 years old and costs less than £50 to produce. The innovative product is aimed at the developing world, where currently most prosthetics are ill-fitted second-hand devices but is also suitable for the developed world.

Alex Nash, fellow Product Design Engineering graduate was a finalist in the Medical and Health Innovator and Digital Innovation categories. Alex has raised over £2 million and created jobs for 16 people at Alcuris which is also based at LUSEP. His digital telecare platform Memo provides local authorities with actionable insights and date and peace of mind for families and reassurance for the elderly and vulnerable is now in manufacture, with its first 1,000 units pre-ordered. Memo is an industry first – the only telecare system that combines a certified social alarm system, activity monitoring, health device integration and carer logging in a single product.

Celebrations at the Morningside Area began with a life-time achievement award for Les Zellan, Chairman of Cooke Optics, the Oscar-winning cinema lens manufacturer whose technology underpins over 100 years of outstanding films, and culminated with Previsco’s third award as overall Innovator of the Year.

Loughborough University Pro-Vice Chancellor Enterprise Professor Tracy Bhamra said: “Many congratulations to Previsco, ExpHand Prosthetics and Alcuris. As well as generating skilled employment to boost the regional economy, their success shows how the innovative solutions they are developing have the potential to make a positive impact on everyone’s lives.”

Headline sponsors of the Leicestershire Live Innovation Awards were Morningside Pharmaceuticals, De Montfort University and the University of Leicester.