Schoolchildren were given the chance to become rocket scientists for the day when members of the Loughborough University’s Space Society held a one-off aeronautics session. 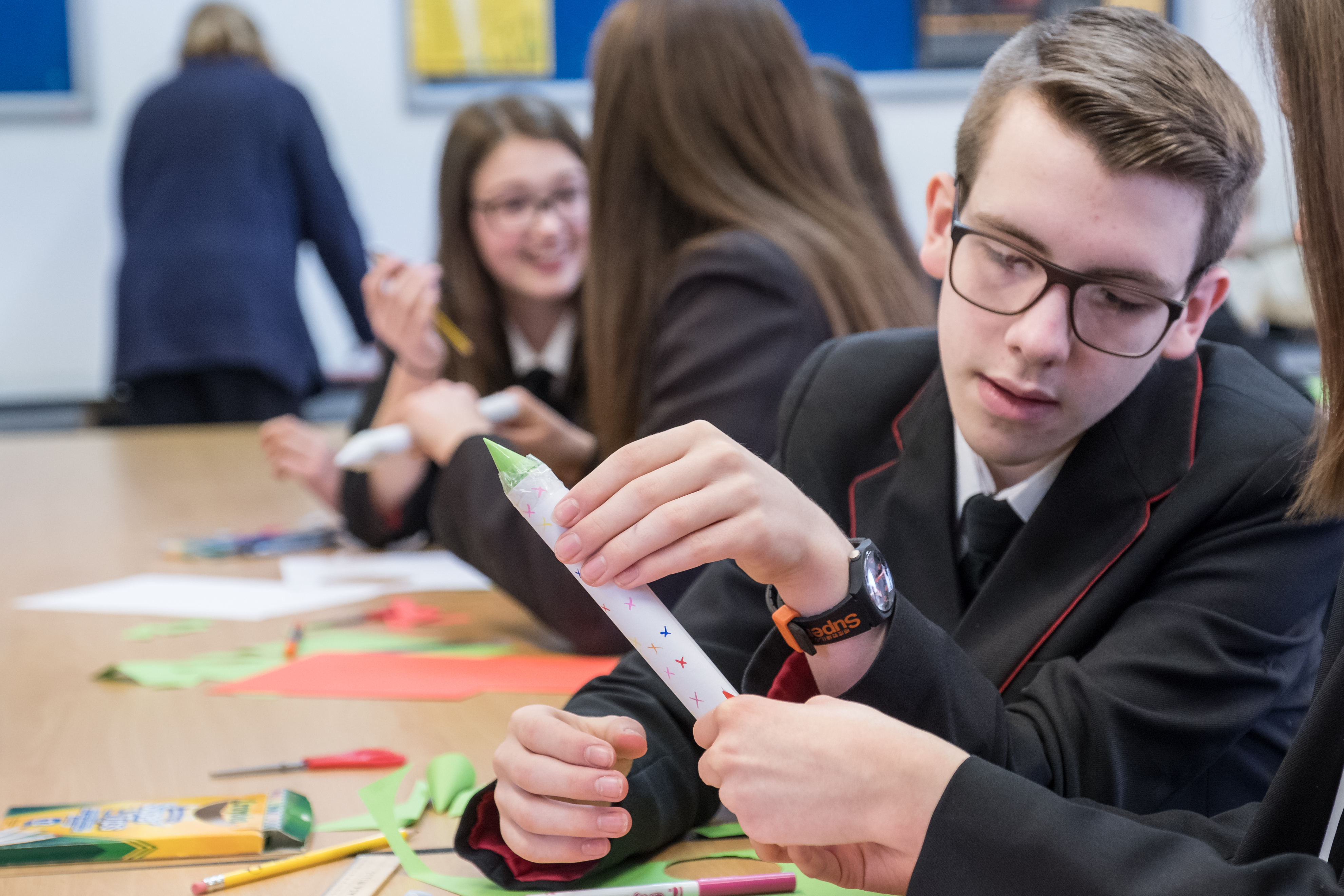 The group of 25 teens, from Humphrey Perkins School, in Barrow Upon Soar, took part in Subject in a Box – an outreach programme designed to introduce year 10 students to new, hands-on topic such as engineering, English, chemistry and drama.

On Friday, March 16, Loughborough Space’s head of rocketry James McKevitt, 19, and society colleagues, set the pupils the task of building and firing a rocket as far as they could, using air pressure.

The youngsters were given A4 paper, glue, Blu Tack and coloured pens – to personalise their creations.

They were also guided through the principals of successful aeronautics in a short lesson involving key stage 4 physics, maths and engineering.

Loughborough student James said the aim of the session was to teach the students all about the fundamental principles of designing rockets, used by real-world engineers.

“It’s essential that engineers like those at NASA understand this mathematics and physics and we hope the students were excited to learn about real-world principles.

“What the students learnt is highly applicable to their current studies, with the mathematical equations that describe flight appearing in a shortened way in their GCSE syllabus.

“The students were told about the observable physics behind these experiments to make them easier to understand, with some basic demonstrations aiding teaching.

“They were then told of simple techniques that can be used to make rocket flight more stable, like weighting various parts and by employing fins to spin the rockets in flight.

“Everyone had to ensure their rockets were structurally strong enough to ensure a safe launch, as they had to withstand large pressures on launch.

“Some interesting designs using a variety of colours were also produced, with students demonstrating a creative flair with their rocket designs and patterns.”

The colourful and varied designs were launched using a device which builds air pressure in a tube system using a foot pump and then releases the stored-up energy when a valve is turned – propelling the rocket into the air.

‌Houston we have the winners: Lotta Mansfield, Claudia Dallow and Owain Brough

Pupils Owain Brough and Claudia Dallow, both 15, and Lotta Mansfield, 14, constructed the winning rocket, launching it 130ft (40m) – with the wind – downfield, landing just 50cm short of the Loughborough Space missile, which was launched as a demonstration moments earlier.

“We thought the whole thing was very interesting,” said Owain. “We learned about how to make the rocket and the angle of how to fire it and then we had to beat everyone’s rockets.
“My favourite thing was trying to make it look good, but we’re definitely glad it flew well too.”

Friend Claudia said: “This was something new and a bit more fun than normal lessons.

“It was interesting learning about how to make the rocket and the best way to get it to go as far as possible.”

She said: “We’re delighted that we’ve been able to do this.

“It’s exciting for the pupils to have someone outside the school come in and show them something new.

“They really enjoyed it, and it was really good for them.”

Subject in a Box is designed to enable teachers of year 10 students to provide their class with a unique insight into degree-level study whilst providing an engaging, interactive lesson, suitable for their current level of learning.

Each box has had input from one of our University academics and has been tailored for students aged 14-15 years-old.

Each box is sent directly to the school, free of charge, and comes complete with a lesson plan, presentation, worksheets and the equipment required to deliver the lesson.

Subject in a Box project lead David Hollis said: “To showcase to children across the country the subjects that are available to study at University through fun and interactive activities and explore what career routes are available through via these subjects.

“In addition, Subject in a Box has a particular focus on reaching children in areas of low progression to higher education – to promote that university is a viable option for them.”