IVO is specifically designed for youngsters aged three to six and is the creation of Industrial Design and Technology student Luke Hannon.

The innovative stand aims to reduce the stress children experience when undergoing treatment by hiding all the medical equipment inside a character-like product.

The inspiration for the project came after Luke met with a child play specialist that works in a hospital.

They discussed how children often find IV treatment a scary, tricky process and Luke witnessed this first-hand when he visited a children’s ward.

He met with doctors, nurses and a boy that was undergoing a blood transfusion.

The youngster told Luke he would often trip over bases of IV stands and that nurses often had to push the stand for him due to its design not being suitable for his age group.

As well as being aesthetically pleasing, IVO looks to overcome a number of practical issues. 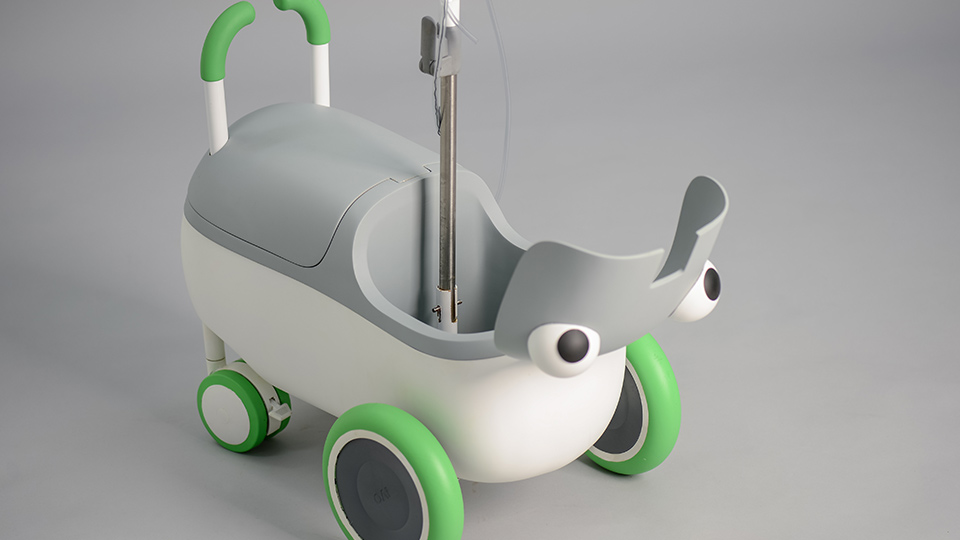 Luke’s design features low handles – making it easy for children to pull the product beside them – and the height has been tailored to the target age group.

IVO also features a fold-down seat for younger children and those less able, meaning they can be pushed around by nurses and parents; and its large wheels enable it to move outside and over rough surfaces.

Commenting on the importance of IVO, Luke said: “When testing the prototype, I spoke to a mother whose daughter is severely ill in hospital.

“She was on a drip for several months and told me how terrified she was when she saw an IV stand coming down the corridor.

“She [the mother] got very emotional when she was telling me about it.

“She told me how life-changing this product would have been for her daughter and how more work needs to be done to better the experience for children in hospital.”

Luke will be showcasing IVO at New Designers in London from 4-7 July, alongside 13 fellow students from Loughborough Design School.

Other student designs that are to be exhibited include a traffic detection device for horse riders and a unique game controller designed for rehabilitation as well as entertainment purposes. More information can be found on the University's dedicated New Designers webpage.