An innovative product developed by a Loughborough University academic aims to increase the number of people with visual impairments taking part in sport by letting children experience independent running from a young age.

According to a Sport England, 61.8% of people over the age of 16 achieve 150+ minutes of activity a week in England and this figure drops to just 34.3% for people with visual impairments.

The Running Line is a collaborative project between Dr Fray and inclusive sports coach Mark Beeby that began in 2012 when the pair identified that children with visual impairments have few opportunities to run independently.

They explored various ways in which youngsters may run along a track without having a guide runner and the solution they devised was the Running Line – a guide wire supported between two padded posts that gives physical, tactile and audible stimulus to support a visually impaired or blind child to run on their own.

It can be adjusted for distances up to 100m and for different heights, and the buffer or position warning can also be adapted depending on how fast a runner is.

For the past four years, Running Line sessions have been delivered to young and adult groups and, as of January this year, sessions had been delivered to more than 250 children with visual impairments and a further 650 people have used the product whilst wearing a blindfold.

The Running Line has proved to be most effective for five to nine-year-olds in infant schools, especially those that are blind from birth. 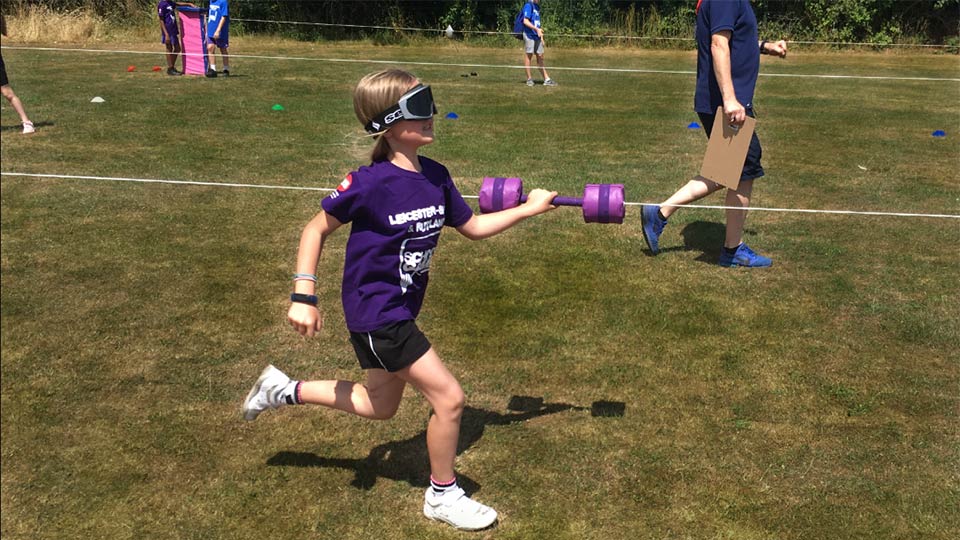 PhD student Winta Satwikasanti has been conducting research into the Running Line to see if it increases the level of activity in schoolchildren with visual impairments and the final results should be known later this year.

However, Dr Fray says early conclusions can be made and the results are positive.

He said: “So far, our research has proved that visually-impaired children get better at running with exposure to the Running Line.

“They get faster, more confident, run straighter and rapidly develop better endurance as they can independently complete more activity.

“A separate study showed that in the younger age groups enjoyment and confidence was clearly shown and there was almost unanimous willingness to continue with the Running Line.”

He continued: “It is a little-known fact that children that are blind from birth have real difficulty jumping or hopping.

“They get their information about the world through their feet and they are reluctant to let go of that solid feedback information.

“All the evidence that we have reviewed suggests that if children do not become involved in sport and activity at an early age it is unlikely that they will ever go back to it.

“This process is a truly inclusive sport project, it delivers an independent running activity for the visually impaired and it delivers empathy for those with sight.”

Some of the children with visual impairments had never competed before and, thanks to the Running Line, they were able to race against their peers.

One youngster at the event said: “The best bit is it makes you a lot safer so you don’t trip over and stuff and it makes you feel more confident.”

Another said: “I like it because I get to run really fast on my own.”

The event was the culmination of a project funded by the Leicestershire County Council Shires Community Grants, The Ulverscroft Foundation and the Boost Charitable Trust, that supported the delivery of Running Line activities in Charnwood, Melton and Hinckley districts.

Dr Fray says the future plans for the Running Line project include trying to get the product on the market.

“We are now getting to the stage where we would like the product to be widely available and placed in schools across the UK and internationally”, he said.

“We have also been working on a more flexible system that could be used in less developed countries where blindness is more prevalent.

“Our ultimate aim is that in 15 years or so we might have created a Paralympian because a young child found a love for running or sport as a result of being introduced to the Running Line.”