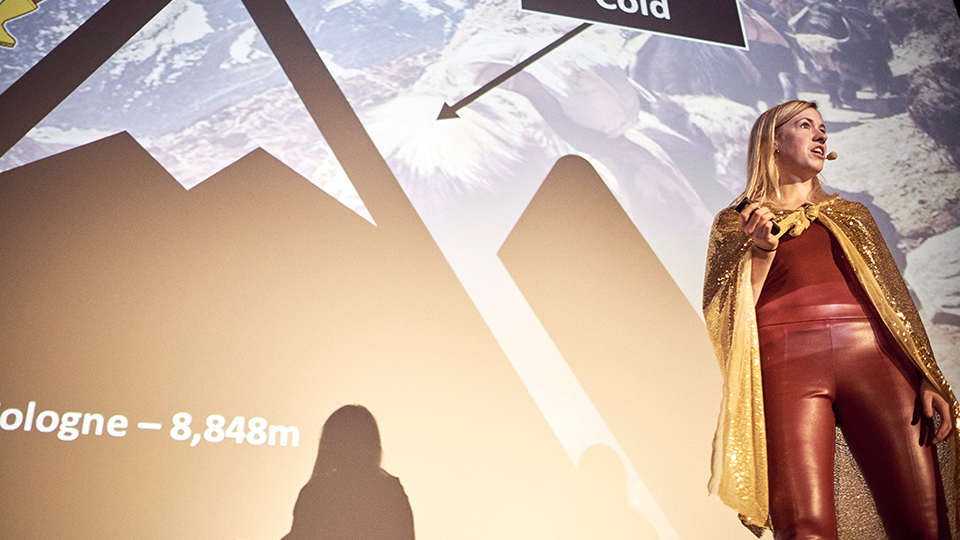 A PhD student from Loughborough University was recently announced the overall winner of an international competition which took place in Germany.

Kate O’Keeffe – who is based at the Environmental Ergonomics Research Centre within the Design School – took part in the 2018 Science Slam World Cup, a competition where young researchers from around the world present their research in front of a non-expert audience.

The aim of the competition is to present research in an understanding and entertaining manner in a 10-15-minute timeframe, using techniques such as live experiments or other props to help communicate a project.

Kate presented her research on the impact of mental fatigue on physical and cognitive performance at altitude.

Working at high altitude exposes people to prolonged mental effort (mental fatigue) and a lack of oxygen (hypoxia), both of which negatively impact performance. Kate’s research aimed to explore the impact of these two stressors, mental fatigue and hypoxia - both individually and combined - on physical and cognitive performance.

She was one of three applicants from Europe selected to take part in the final, which took place at the German Sport University in Cologne last month.

As a result of winning the Science Slam, Kate has been awarded €2,500.

Talking about the competition, Kate said: “I can’t believe that I have won, there were so many amazing, charismatic participants who are all experts in their fields, so to emerge victorious from that group of people from all over the world is a great honour and I am really humbled to have become the first World Champion of the Sport Science World Cup in Cologne.

“It was a fantastic experience, which facilitated fruitful collaborations and really tested my ability to dive out from my comfort zone and present my research in an entertaining and engaging way to a non-expert audience. The main thing I learned however, was to “not hide me!”

More information on the 2018 Science Slam competition can be found here and you can watch Kate’s presentation on YouTube (starts at 1:44:00).