A quarter of all children in the UK are growing up in very low-income households, according to a new report into minimum socially acceptable standards of living. 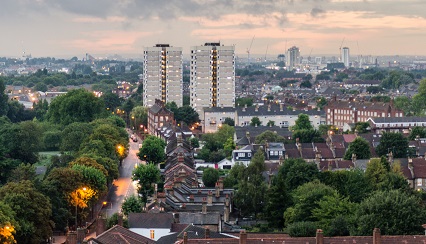 Some 3.5 million youngsters live in "low wage" households in the UK

Analysis undertaken by Loughborough University’s Centre for Research into Social Policy (CRSP) has revealed that 3.5 million young people are living in households which fall below 75% of the Minimum Income Standard (MIS).

The number has risen by more than 250,000 compared to last year.

The MIS is based on what members of the public consider people need to have a minimum standard of living, which includes things like food, clothing, household bills and travel, but also provides enough for people to take part in the world around them.

It establishes a threshold below which households struggle to make ends meet.

The report, Households Below a Minimum Income Standard: 2008/09 to 2017/18, out today, was funded and published by the Joseph Rowntree Foundation (JRF), and also looked at working-age adults and pensioners.

The groups were broken down into:

It also revealed that 5.8 million children are living below MIS.

Dr Juliet Stone, one of the authors of the report, said: “Families with children have been hit especially hard by the ongoing erosion of state support.

“At the same time, the costs of essentials such as public transport and energy have continued to increase, meaning that over a quarter of the population of children in the UK are now living in households with incomes significantly below the Minimum Income Standard.

“What’s more, it is increasingly the case the families struggle to make ends meet despite being in work – half of all lone parents in full-time work do not have the income needed for a minimum socially acceptable standard of living.

“These latest findings suggest that the policies such as the freeze in Child Benefit and tax credits are continuing to have a profound, negative effect on the living standards of children, and across the UK population.”

The proportion of all individuals below MIS has fallen each year since 2013/14, having previously increased every year between 2008/09 and 2013/14. Despite these falls, a greater proportion of people are living on an inadequate income now than in 2008/09.

Pensioners remain the group least likely to be living in a household with an inadequate income.

However, the proportion of older people living below MIS has increased by nearly 50% since 2008/09.

Lone parent households continue to be particularly affected by the freeze in Child Benefit and tax credits.

The report said that the impact of this freeze will continue to be felt most acutely by these households. 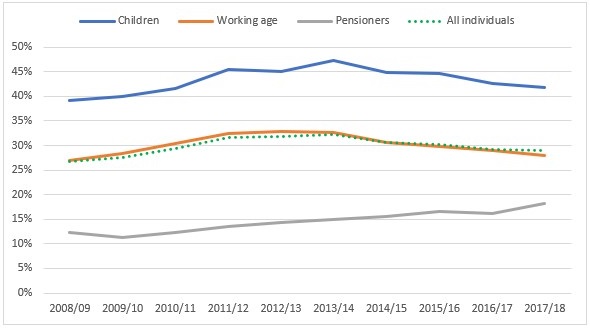 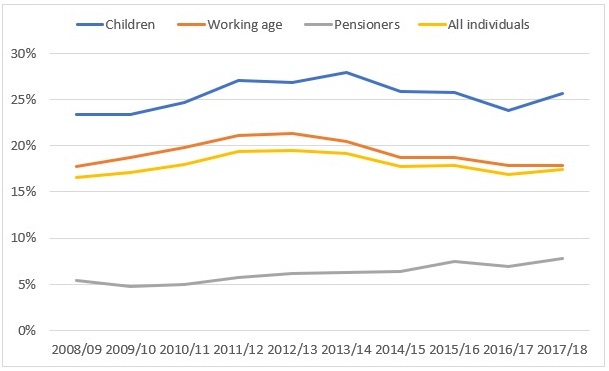 The report was co-authored by Matt Padley.

The Minimum Income Standard (MIS), carried out by the Centre for Research in Social Policy at Loughborough University, acts as a barometer of minimum living standards in the UK.

It is not a poverty line but is based on what members of the public think we all need to achieve a decent minimum living standard, regularly updated as society and the economy changes.