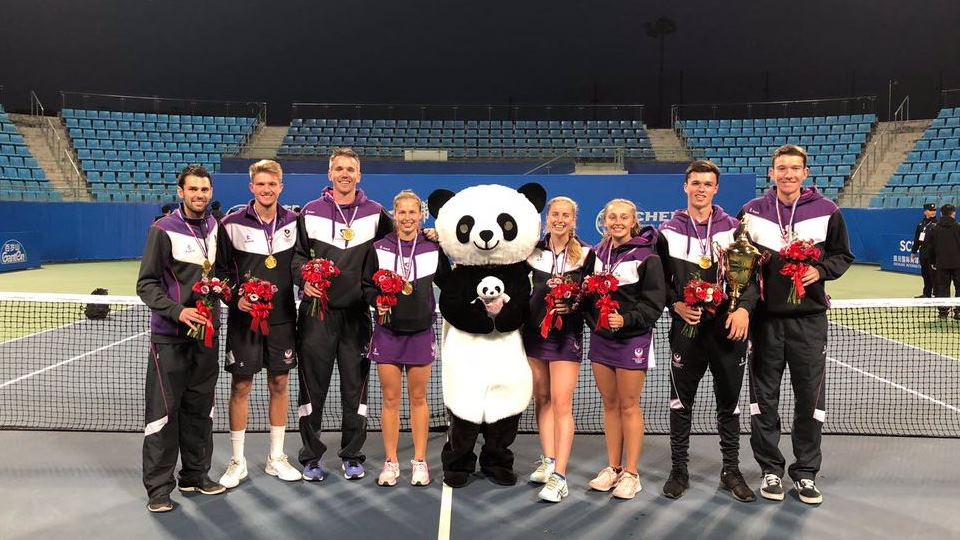 Loughborough University’s Tennis Programme has bagged a once in a lifetime trip to the Australian Open next year thanks to an outstanding victory in an international tournament in China, which saw the best Universities in the world go head to head.

Competing in The Belt and Road tournament for the first time, a team of six travelled to China to take on seven other Universities from around the world, with group matches preceding the knock-out stages. In Davis or Fed Cup style, each tie would see five matches; men’s and women’s singles, men’s and women’s doubles and a mixed doubles clash.

After a round robin style group stage, Loughborough topped their group by two games, which set up a semi-final against Moscow State University. A crushing 4-1 win against their Russian counterparts set up a final against local favourites Zhejiang University, which would go to the wire.

Having beaten the Chinese side by a mere game in the group stages it was always set to be a ding-dong battle, something that rung true as the contest was tied 2-2 heading into the deciding mixed doubles contest. In action for Loughborough in the decider were George Houghton and Olivia Sofroniou, the duo holding their nerve incredibly well to ensure Loughborough got their hands on the trophy.

The team will now be rewarded with a once in a lifetime trip to the Australian Open in Melbourne in January, where they will receive tickets to see the best in the world in action, get a behind the scenes look at the tournament and benefit from some world class coaching.

Of the achievement Director of Tennis Helen Reesby commented:

“Firstly I want to congratulate all of the players for a great tournament over the last week – they really should be proud of their achievements. However this victory really highlights the work Tom Kisiel has done over the last couple of years to build our tennis programme and I’m hopeful that this is the first of a number of major victories for our squad over the coming years.

“The University has really invested in tennis over the past two years and hopefully this is one of the first examples of this bearing fruit. Our partnership with the LTA is going from strength to strength, namely through the new National Academy that will open its doors next year, so the opportunity for students to get involved with tennis has never been greater, whether this be through playing, coaching, volunteering or supporting our players in a multitude of different ways. There is no question that getting involved with tennis can add to the life changing experience students get by studying at Loughborough University.”

Congratulations to all of the team:

Playing at the Sichuan International Tennis Centre, a venue that the likes of Andy Murray have played in, the Loughborough students in action got to play in world class facilities and also experience a number of cultural opportunities in the Chinese city. Funded by Tennis Australia, the Chinese Tennis Association and Chengdu Sports Bureau, the tournament is brilliant development opportunity for student-athletes from across the world.

For further coverage of Loughborough’s victory, and to follow the team’s adventure to Australia, please follow the channels below: