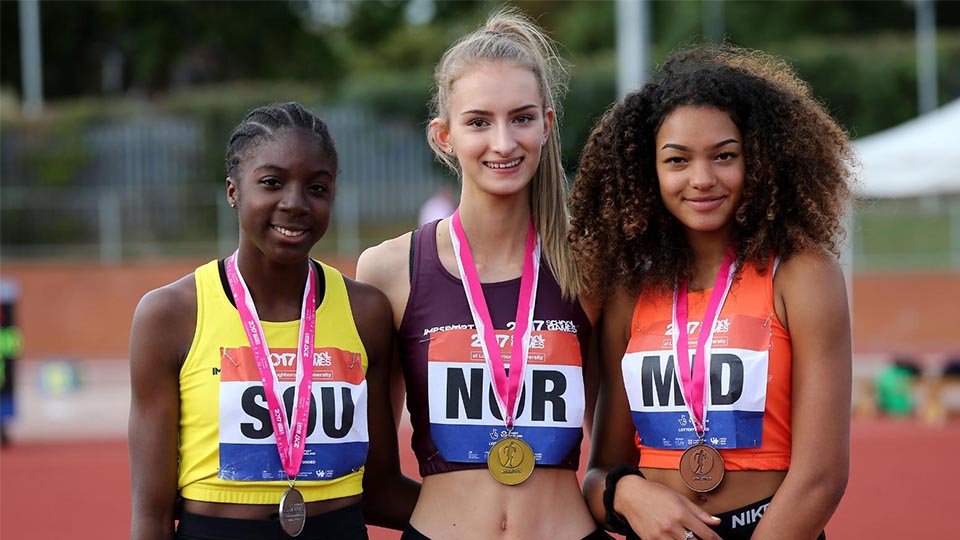 The 2017 School Games came to a close yesterday (3 September) with a whole host of medals contested on the final day.

From 31 August to 3 September, Loughborough University’s campus was home to around 1,600 of the UK’s most talented young athletes, as they competed across 12 sports, seven of which included disability disciplines.

For many of the athletes the School Games, which were supported by National Lottery funding from Sport England and delivered by the Youth Sport Trust, represented their first taste of a major multi-sport competition. They lived in a dedicated athletes’ village, took part in an Opening Ceremony and performed in front of huge crowds of spectators.

The athletes were following in the footsteps of some of Britain’s biggest sporting stars who have competed at the event before going on to senior international success. Previous competitors include Paralympic champions Hannah Cockroft, Ellie Simmonds and Jonnie Peacock, Olympic champion Adam Peaty, heptathlete Katarina Johnson-Thompson and GB sprinter Adam Gemili.

Ali Oliver, Chief Executive of the Youth Sport Trust – the national children’s charity which delivers the School Games - said: “Congratulations to the talented young athletes who made this year’s School Games such a spectacular four days of sport. Since the first School Games just over a decade ago, almost 20,000 school-aged children have had the opportunity to compete in this high-level multi-sport competition which has helped prepare some of our top sporting talent for success at the Commonwealth, Olympic and Paralympic Games.

“Our thanks go to the National Lottery for their funding through Sport England and the many partner organisations and volunteers who helped make the 2017 School Games such a success.

“The School Games Finals showcases the best of school sport, but there is a lot more to it than an elite sporting competition. From the thousands of schools taking part in School Games competitions throughout the year through to the National Finals at Loughborough University, these events are about inspiring young people of all abilities to achieve their potential both on and off the field. It’s a fantastic example of the power of sport to enrich and improve young people’s lives.

“For all at the YST today we start a new academic year and look forward to working with more schools to unlock the power of sport to help young people achieve their potential not just in sport but in life.”

A round of each day’s action is available on the School Games website, along with details of the results for every sport.

About the 2017 School Games

The 2017 School Games are a national multi-sport event for the most talented disabled and non-disabled young people in the UK.

The School Games were established after London won the bid to host the 2012 Olympic and Paralympic Games as part of the legacy programme.

About the Youth Sport Trust

The Youth Sport Trust is a charity on a mission to build a brighter future for young people through PE and school sport. It believes that every child has the right to be physically active through high quality PE and school sport, with a huge body of evidence showing it has the power to improve young people’s health, wellbeing and potential in life. Through over twenty years of expertise and partnerships with schools the Youth Sport Trust has developed unique solutions to maximise the power of sport to grow young people, improve their wellbeing and enhance their life chances.

Sport England is a public body and invests more than £300 million National Lottery and government money each year in projects and programmes that help people get active and play sport. It wants everyone in England, regardless of age, background, or level of ability, to feel able to engage in sport and physical activity. That is why a lot of its work is specifically focused on helping people who do no, or very little, physical activity and groups who are typically less active - like women, disabled people and people on lower incomes.

About the venue – Loughborough University

Loughborough is ranked in the top ten of UK universities and has an international reputation for sport performance, education and research. It was named Sports University of the Year 2017 by the Times and Sunday Times Good University Guide and is ranked number one in the world for sports-related subjects in the global QS higher education league table.

There are currently more than 400 performance student athletes are studying and training at the University and Loughborough students have won the British Universities and Colleges Sport (BUCS) championships for the last 36 years running. In Rio 2016 Loughborough athletes won 12 Olympic medals and 22 Paralympic medals.