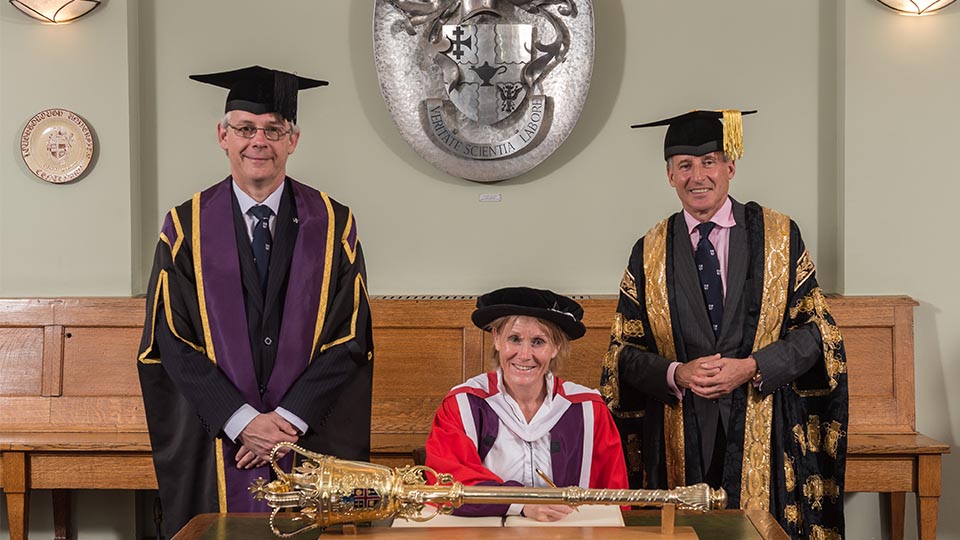 Penny Briscoe OBE, Director of Sport at the British Paralympic Association, has been awarded an honorary degree by Loughborough University.

The award – in recognition of her outstanding contribution to Olympic and Paralympic sport as a coach and administrator – was presented at the University’s degree ceremony on Wednesday 19 July.

Penny Briscoe has more than 30 years’ experience in elite sport. Her journey began in 1983 as a Great Britain Canoeing Junior, from which she went on to compete at under 23 and senior levels, including at the 1996 Olympic Games in Atlanta.

She then moved into coaching and programme management with British Canoeing, before moving to the British Paralympic Association in 2001. She became their Director of Sport the following year, responsible for the preparation strategy in the lead up to competitions and world games.

Penny graduated from Loughborough University in 1988 with a Postgraduate Certificate in Education. She maintains links with Loughborough through collaboration with the University’s Peter Harrison Centre for Disability Sport and has also utilised the resources available at the University to help drive and deliver her strategy, with the motto of 'Best Prepared'.

Before presenting the award of Honorary Doctor of the University (DUniv), the University’s new Chancellor, Lord Sebastian Coe, thanked Penny for the Herculean work she has done to make the Paralympic movement in Britain and globally what it is today.

“There is no coincidence that the Paralympic movement has gained under your period of stewardship, particularly in terms of performance and direction. Thank you so much for doing what you’ve done,” said Lord Coe.

Accepting the award, Penny said she felt privileged to be recognised for her work in Olympic and Paralympic sport and immensely proud given that Loughborough is the world-leading sport university.

She said: “Personal success is often a result of collaboration with and support from others. Talented individuals can achieve a lot, but in my experience talented teams can often achieve much more.

“ParalympicsGB’s incredible success in Rio was down to the talent, pride and determination of every team member. Our success demonstrated exactly what is possible when a high performing team within a high-performing system comes together with a shared vision.

“The 2018 winter Paralympics will be my tenth Games. My longevity is without doubt down to the inspiration and energy that I draw from the incredible athletes, their talented and dedicated support teams and my British Paralympic Association colleagues. Ours is a ‘can do’ culture, an environment where ability not disability shines through and where the term ‘impossible’ transposes easily to ‘I’m possible’.”