Lord Sebastian Coe has been installed as Chancellor of Loughborough University. 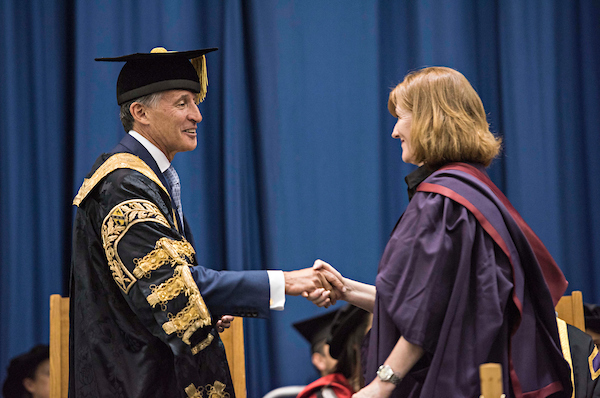 The two-time gold medal-winning Olympian received his robes this morning during the first summer graduation ceremony of 2017 – held at the Sir David Wallace building.

Almost 1,800 graduands and family members watched as Lord Coe accepted the ceremonial role and took his place centre stage, between Vice-Chancellor Robert Allison and Senior Pro-Chancellor Sir Peter Bonfield, for the start of the degree ceremony.

He is only the sixth Chancellor in the history of Loughborough University, replacing Sir Nigel Rudd.

“I arrived, and passed through this wonderful university some 40 years ago,” said Lord Coe, addressing the packed auditorium. “And, like many of you in this room, and those on this stage, I have watched with great pride as this university has graduated to best-in-class both domestically and overseas.”

“I really don’t need to say today that it’s one of the proudest days of my life,” he said.

“I hope that you, who are graduating today, you will join me on this journey of representing this university, both at home and overseas, and supporting everything it has historically stood for and everything it will achieve in the future.”

His first task in the post, which will see him act as Chief Ambassador of the University, was to confer degrees and awards to students of the University’s School of Sport, Exercise and Health Sciences – which recently played a huge part in earning the University the title of Best Sporting University in the World.

He will continue in his formal capacity in the remaining graduation ceremonies being held tomorrow, Thursday and Friday.

The University’s Vice-chancellor Professor Robert Allison hailed the occasion as a “great day” for Loughborough.

“So,” he said. “Today is a great day for the University.

“We’ve installed Lord Coe, Sebastian Coe, as our Chancellor and this is only the sixth time we’ve had a day like this in our University’s history

“What’s most significant about it is that Seb’s one of our own - he’s a Loughborough graduate and he’s gone to achieve world class recognition for the contributions he’s made both as a sportsman and for what he’s done for the country – for example London 2012.

“So, great day for the University and we can be proud that Seb is now Chancellor.”

The Chancellor's installation ceremony can be watched here (10.30am Tuesday 18 July).