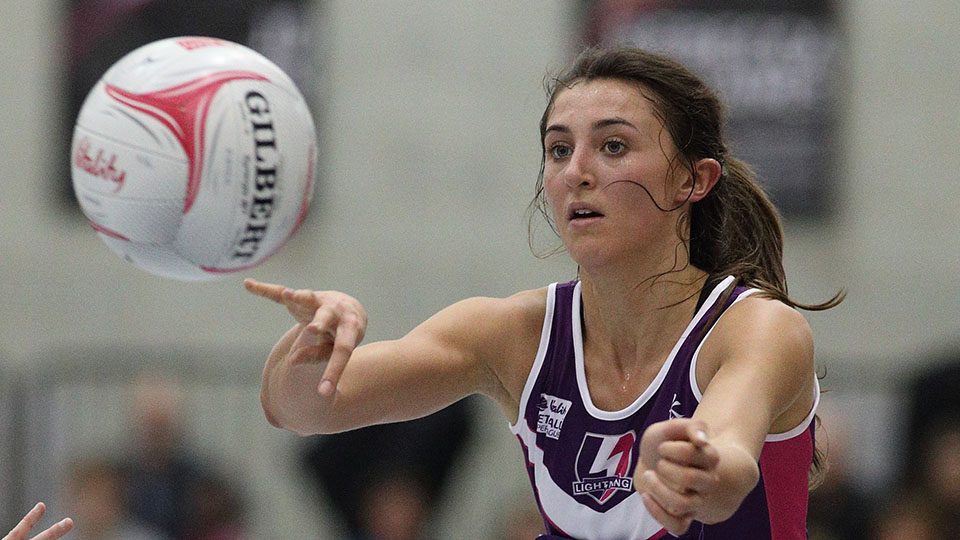 Loughborough Lightning have moved clear at the top of the Vitality Netball Superleague table after recording their seventh consecutive win of the 2017 season.

Beating Welsh side Cardiff Dragons 65-45, the team in purple maintain their 100% record and are sitting pretty three points clear at the top of the table as the season approaches the halfway point.

After a Dragons centre pass the ball was turned over and Lightning got the first goal of the game to set the tone for the encounter, which was one way traffic early doors. Two became, three and four as the goals flew in thick and fast, capped off by a fantastic interception from Loughborough University alumna Vanessa Walker, which set up the sixth. Dragons finally got a foothold in the game with three consecutive goals, with the score line remaining three or four goals in Lightning’s favour until the end of the first quarter.

The game continued in a very physical manner, with both sides fighting hard for the ball and giving as good as they got. Loughborough University MSc student Peace Proscovia was once again in scintillating form, scoring time after time to ensure Lightning extended their winning margin as the clock ticked over towards halftime.

A free flowing start to the third quarter saw the girls in purple extend their lead further, racing out into a 37-27 lead. It was at this point the hosts started to crack, as their defence was warned for foul play; it wasn’t helping though as the Lightning lead continued to grow at an alarming rate thanks to smart play in the centre court and sharp shooting from Proscovia and Walker. By the latter stages of the quarter the Lightning lead had reached 20 points and the match looked all but over.

The final quarter was all about seeing the game out, Lightning knowing a win would put them clear at the top of the table after Storm were beaten by Wasps on Saturday. That was enough to spur the girls on, some great netball ensuring their lead continued to grow. A late surge from the hosts, much to the delight of their fans,  narrowed the gap, but in truth it was a convincing victory for Lightning.

“I speak on behalf of all the girls and support staff when I say we're delighted to be top of the league! There is still a long way to go, but we're well on track to finish in the top four and then anything can happen.

“Tonight's game was a physical encounter and credit to Dragons who did their best to make it hard for us. In the end though I think it was our interception rate and clinical shooting that saw us through.”

Loughborough Lightning will be back on the road for rounds seven and eight as they take on Team Northumbria and Severn Start respectively. They then return home on Easter Monday where they face Team Bath at 4pm. Tickets are on sale now so why not treat the family to a spectacular showcase of netball this Easter? Tickets can be bought online at: www.loughboroughlightning.com.