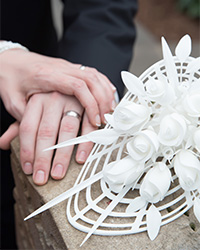 Dr Guy Bingham, Senior Lecturer in Product and Industrial Design, has designed what is believed to be the world’s first 3D printed wedding bouquet, complete with nine nylon plastic roses, which incorporates the movement of a real spray of flowers.

The bouquet, which took 40 hours to create, and 18 hours to print using a laser sintering system, was designed for the bride Dr Candice Majewski for her wedding to Bret Hughes in Indianapolis, Unites States. Candice is a Loughborough University graduate and mechanical engineering lecturer at the University of Sheffield.

Dr Bingham said: “Candi and I have been friends for years and we lived together during our PhDs when we were both employed as research associates at the Wolfson School of Mechanical and Manufacturing Engineering.

“Candi wanted her bouquet to be quite dainty and elegant and I was inspired by the challenge. I would have really liked to have attended the wedding, but the location and timing meant that it wasn’t possible. Designing this bouquet for her, and it being such a big part of her day, was the next best thing for me and I was delighted to have created something which she can keep as a permanent reminder of her wedding day.”

Dr Majewski said: “Having spent years working in AM research, it seemed only natural to incorporate some aspect of it into our wedding.   When Guy offered to design my wedding bouquet I was over the moon and what he came up with was better than I even imagined. The flowers were a perfect reminder of home on the big day, and are something I will be able to enjoy for the rest of my life.”

Dr Bingham, who has been a lecturer within the Loughborough Design School since 2010, gained a PhD within AM textile structure design and modelling in 2007. He has since designed many items using AM techniques, including footwear, personal protective equipment and the world’s first conformal AM textile dress and personalised Taekwondo torso protector.