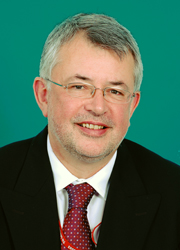 Prof Mike Jackson joined Loughborough University as a Lecturer in 1987 and was promoted to various posts over the ensuing years. He became Principal Investigator and Director of the EPSRC Centre for Innovative Manufacturing in Intelligent Automation from its inception in July 2011 to its conclusion in March 2017.

Mike has now retired from full time academic life, but continues to engage with the University via the Wolfson School of Mechanical, Electrical and Manufacturing Engineering and the Intelligent Automation Centre.

Prof Mike Jackson has had a long and fruitful industrial and academic career which spans over 40 years.

He gained his BSc (Hons) in Mechanical Engineering at Salford University in 1975. Mike developed an exceptionally strong industrial background in the UK machine tool industry whilst employed by the Wadkin Group plc, UK between 1968-1986, where he attained the Board level position of Technical Director there in 1983. He undertook company based research at Wadkin on machine tool vibration from 1978-1986 and was awarded a PhD (CNAA) in collaboration from Leicester Polytechnic in 1986.

In 1987, Mike was awarded an MSc in Flexible Manufacturing Systems and Robotics at Loughborough University, following which he joined the Mechanical Engineering department at Loughborough University as a Lecturer. He was promoted to Senior Lecturer in 2000 and Chair in Machine Systems in 2007 and was also academic theme lead for Intelligent Automation at the Manufacturing Technology Centre from 2009 to 2017.

Mike became Principal Investigator and Director of the EPSRC Centre for Innovative Manufacturing in Intelligent Automation at Loughborough University from its inception in July 2011 to its conclusion in March 2017. During this period, a team of 50 academic staff, RAs and PhD students were engaged in TRL 1-4 research in Robotics and Automation for a new wave of advanced manufacturing machines.

His career research earnings are in excess of £13 million, with over 60 PhDs graduated and RAs supervised, resulting in more than 250 Journal and Conference publications.